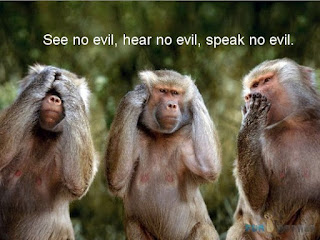 Am I living in LaLa Land? That's a question I ask myself every day when I awake because whatever crises that are unfolding in the world at large they are rarely mentioned here in Denmark. You can have both financial and nuclear meltdowns and all the time it all seems like some faraway dream, only mentioned in passing on the news because they had some spare airtime to fill after all the slots about teachers wanting slightly more pay, and kindergartens looking at a staff shortfall of 0.3% by 2020, possibly.

Sometimes I have to pinch myself. Is it me dreaming or is it everyone else? Denmarkland, you see, is populated with the world's happiest people, and everything here is the Best In The World - it must be because we are told that on the news practically every day. Or occasionally second best (after arch-rivals Sweden). Nothing is ever allowed to disturb the flow of good news here, which is kind of ironic in the country where an awkward man who felt like he didn't fit in wrote a story called The Emperor's New Clothes.

In this country nobody is poor. Nobody is rich either (in theory, at least). Everybody has a high standard of living. Many families have second homes - usually here in Denmark but often in far-flung places like Thailand. A woman I know played a round of golf there last weekend and said it is best to go for a whole week but that it was not too far for a weekend break. Thailand! I once saved up for a whole year to go there and 'find myself'.

Here, your life is mapped out for you from the cradle to the grave and is done so by means of welfare. When you are six months old you go to nursery school. You then go to primary school, followed by proper school which, confusingly, is called gymnasium. Then, usually, you go to university (remember, most are middle class), which lasts for up to about 12 years and is normally rounded off with a PhD in something obscure but usually related to Denmark's big money earners: pharmaceuticals, IT, engineering and design. Then you have a stint known as your 'working life' which brings you up to 60ish, upon which you retire to a golden nest egg.

If, at any point during your working life you have the misfortune to find yourself unemployed, you don't really need to worry. Despite having no job you can still look forward to about 12,000 kroner a month courtesy of the government (that's about $2,100 after tax).

Some people retire early- like when they are 30. This is called 'before-time-pension' and is usually awarded to people who have had something traumatic happen to them, like a car accident, or if they are stressed at work. There are currently about 245,000 people on this - or about 7% of the working population.

All this adds up to make Denmark one of the happiest places in the world. People walk around with wide grins and proclaim that they could never live anywhere else because nowhere else matches up. To suggest otherwise is taboo, as I have once found out. And there are some good historical and cultural reasons for this which I am not going to argue with at all.

In fact, it's not my intention to rant about the country where my daughters were born, or where my life was saved when I suffered acute peritonitis or indeed where I took advantage of the generous welfare scheme as I worked my way through most of the books on my shelf that I had put off reading. No, that's not my intention at all (although gods know I've done so in the past).

Instead I just have one question: who is paying for all this?

It's a simple enough question: who pays for a lifetime of welfare and one of the highest standards of living in the world in a country that, basically speaking, has almost no natural resources, a smattering of light industry and the highest taxes in the known universe?

This is not a question most people would be willing to have a go at answering. But I'm just wondering about the gap between reality and the perception of reality here. Denmark, after all, was one of the few - perhaps the only - country to take oil shortages seriously in the 1970s. Could it be that in the intervening years a culture of schadenfreude has developed - a kind of ingrained 'resting-on-ones-laurels' attitude?

I suspect, after a decade of observation, that the true answer is much more complex and murky than that. For now at least, investors are pumping money into the country as it is seen as a safe haven. But how long can this last? I'm just wondering.

But in the meantime I have to try and convince myself that I am not going insane. Please, somebody tell me that there are actual problems out there in the real world and that all the smiley happy faces I see everywhere, and all the TV talk of Denmark avoiding 'the crisis' as they call it, and the suggestion that the most salient news event of the year so far was that cruise ship turning over off the Italian coast - please somebody say that it's not me that is going insane!

In each post from now on, in a countdown from 10, I will be introducing a Peak Oil rock band.

Have you ever listened to a piece of music and thought: 'Wow, that perfectly expresses how I feel about peak resource production and some aspect of the likely ramifications on our wider society that are likely to ensue'? I thought as much. This, then, is my Top Ten of rock bands spanning the last 40 years or so who tell it like it is regarding mankind's follies when it comes to energy expedience, rampant consumerism and our vapid, empty and entitled way of life.

Why rock music? Because, just like science fiction, rock music has a way of getting to the core of important matters. It vents our fears and anguishes and gives voice to the power of the soul in its indignant howling rage. As such, it is probably the only modern form of music that is unafraid to challenge the status quo, albeit in a safe 'free speech' type of zone.

[Don't worry, there will be no actual Status Quo in in the Top Ten]

Please note that all these selections are taken from the shallow pool of my own CD collection, which effectively mirrors my own lifespan of the last 40 years (plus a few extra - I was 'retro' before the term was even invented) - if you'd like to add your own choices feel free in the comment section.

So, without further ado:

No 10. Julian Cope of the Teardrop Explodes

As a once legendary imbiber of consciousness altering drugs, Mr Cope makes it into the Top Ten by virtue of the fact that he wrote the song World Shut Your Mouth, which contained the lyrics 'put your head back in the sand and shut your mouth'. Clearly Cope, who went on to become one of the foremost modern-day scholars on Megalithic remains in Europe, was thinking of the blanket refusal of the modern world to take serious matters, er, seriously when he wrote those lyrics.

Despite being a pagan, a blogger and a scholar of the antiquities, Cope still found time to go solo and release several albums, including Autogeddon - an album about the fate that awaits us if cars are allowed to dominate our lives. It includes, seemingly, a reference to killing an SUV driver with a rock and is clearly the stuff that more people should have listened to while they were growing up in the 1980s.

Posted by Jason Heppenstall at 10:21 PM