A House for the Future 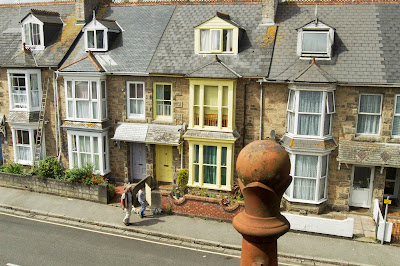 It seems we're all at it now. Those of us dot-connectors who are concerned enough about the future to take action and relocate are scurrying across the face of the planet looking for somewhere we consider the odds might stack up in our favour a bit better than where we were before. Over at Resource Insights, Kurt Kobb can be seen relocating across the vastness of America to a new home in Oregon, the Doomstead Diner's RE went one step further and is now hiding out somewhere in Alaska and Ray Jason explains why he has taken to the high seas.

As for myself, I chose to take flight from the ostensible safe haven of Denmark and fling myself and my family to the furthest western reach of Britain - namely Penzance in Cornwall. I described my rationale behind the move here, and all I can say at present is that after four months here it feels like the right choice. I did, of course, buy a piece of woodland nearby, which is where I'm crafting my post-industrial career as a woodsman, with the first half acre of chestnut and oak to be coppiced this winter. At some point in the future, perhaps when planning regulations have drowned under their own weight, I'll build a nice little hobbit hole there. It'll be somewhere I can put me feet up and roast chestnuts as I eke out my non-retirement in as comfortable a manner as possible.

But that's future talk. Right now it makes more sense to be within a town, close to the children's school and also the shops. Which is why we've just completed the purchase of a house right in the centre of town.

Now, I would say that it's been quite a long and fraught process getting hold of this particular house. Not only did I have to take a major loss on otherwise stranded assets from our life in Spain, but I also had to negotiate several fraught months of having that money within the UK's increasingly fragile banking system, with a major risk of me being asked to bail out one of the TBTF banks with my savings. Nevertheless, the camel passed through the eye of the needle and I was able to spend pretty much every penny on a place that we can now call home and which we own 100% without even a penny of debt.

None of it would have been possible had my father not passed away last year, but I think he would approve of the fact that we have bought what he would term a 'fixer upper'. That is, the house is solid and the fundamentals are all in a good state, even if it needs something of an overhaul in various areas which I will list below. I'm only setting this out so that others may also start to think about what is important in a house fit for the future, and it's in no way an attempt to show off my abode as if I'm this week's  Through the Keyhole mystery person.

It's perfectly possible, if you have ownership of your own property, to live very simply and cheaply. These people here manage to do so - perhaps they are role models whom we should seek to emulate (as is Joan Pick). With that in mind my criteria for buying a house were relatively straightforward:

- It has to be built to last. Most houses built in Britain after the last world war were not built to last. The one we chose was put up at the end of the nineteenth century, is constructed from heavy granite, is standing on bedrock and shows no sign of it not being able to stand for another thousand years or so. The walls are thick and the foundations are solid. 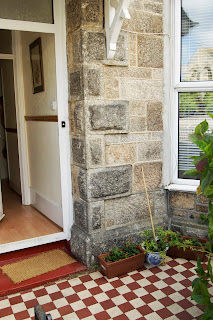 - It had to be big enough to allow for different economic activities to be undertaken in it, but not so big that it would be unaffordable to heat or maintain. Ours has a basement which can be dug out some more and used as a workshop by my wife for her upholstery business, and  - joy of joys - an office space for me on the top floor. Furthermore, my assumption is that my kids will not be able to afford their own homes in the future, and that they'll be hanging around in our house far longer than is currently considered normal. With four floors, there should be space for us all.


- It had to be close to amenities so that we can walk everywhere. Our house is a two-minute walk from the shops in the centre of Penzance. The town has pretty much everything you might want, from food stores and cafes, to a hardware store and a library. The hospital is a ten minute walk, the kids' school a five minute walk and the nearest pub is 98 seconds away (I timed it).

- It had to be easy to retrofit. One of the first things I will be doing is studying the central heating system and figuring out how I can get it running on wood fuel. I have two very heavy and antique wood-burning stoves from Scandinavia, which I salvaged, and which will be useful in our house as soon as I have disconnected the gas. At present all water heating is done by a dangerous-looking boiler in the basement which has a very large gas-guzzling pilot flame.


I'll be looking to get water heating panels on the roof as soon as I can, and probably solar PV ones as well. At present the government is offering 'free' solar panels, although there are plenty of strings attached. I don't want to get into any debt, but nevertheless may take them up on this offer given that we have no more funds to finance things like that. The house is aligned north to south, meaning the morning sun heats up the back and the afternoon sun hits the front.

There is a carport at the back, big enough for two cars. My plan is to rip up a lot of the concrete and plant a small garden here. There's also a tiny garden at the front, which will probably just remain ornamental, perhaps with these coffee bushes (the house next door has bananas - everything seems to grow here).


There are, of course, a whole lot of other factors that I need to take into account - especially insulation. But it is a terraced house, meaning that heat is not lost on either side, and the huge thermal mass of the walls at the front and back should be handy for keeping it warm in winter and cool in summer.

- It had to be above sea level. At 40m, up a steep hill from the sea (which is about half a mile away) I'm not too worried about sea level rise and storm surges just yet.

- It had to be affordable. This is one reason to choose the far west of Cornwall. Although house prices are still inflated by the bubble, this is one of the more affordable areas of the UK. Our budget was £200,000, which is about £40,000 less than the average house price. This is still an outrageously high amount by historical standards, and I'm fully aware (and grateful) that by some good fortune we had the money for it.


- It had to be located in a good economic community. Penzance is a smallish market town with excellent trade links. The nearby railway station offers services to London, and everywhere in between, which is why the town thrived in Victorian times as fresh fish and flowers were sent daily to the capital, and tourists flowed in the other direction. Penzance is also a port, and it is easy to get to nearby France and Ireland. The house we have bought was most likely built by a merchant from those times. Given that I presume we will be rewinding the clock and going back to an economic model that will look a lot more like Victorian England than the current fantasy-based economic model, this can only be a good thing.

As you can see from some of the pictures I have included, I have a wealth of junk that needs sorting through. My several years' dumpster diving in Denmark mean I have a lot of nice old furniture, plus several thousand books and enough old but functional tools to set up a second hand hardware store. It will seem incredible in years to come that I was able to come by all of this stuff for nothing - or almost nothing. In total, I have five large trailer-loads full of 'stuff' - two of which are still in far-flung corners of Europe (another Spanish adventure awaits next month), which is the culmination of at least four lifetimes. And even then we are still lacking such basics as a sofa and mattresses - although I'm certain I can get hold of these from Freecycle in the coming weeks. 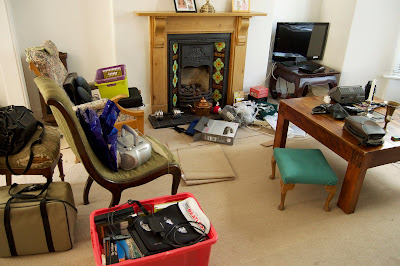 And below is the view from my new office window which looks out over Mount's Bay to St Michael's Mount. It beats sitting in the kitchen staring at a white wall, which I have been doing the past few years writing this blog, but it remains to be seen whether I'll be able to stop looking at it and actually get some work done. 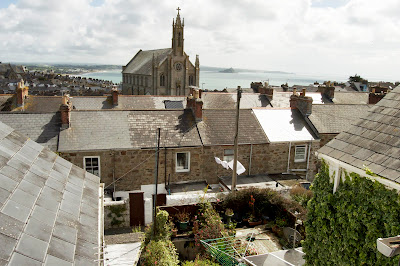 So that sums up our new abode. It's been a long and winding journey to get here and it's emptied the coffers but - as Dmitry Orlov notes - we're going to lose our money anyway, it's up to us to choose the manner in which we do so. And that's just what I've done. I have no debt, no pension fund to look forward to, no stocks or shares, no precious metals hidden away and very little cash and no permanent job - but what I do have is a house that is suitable for living in and earning money from into the far future and that, in my opinion, represents a store of real wealth.
Posted by Jason Heppenstall at 10:27 AM