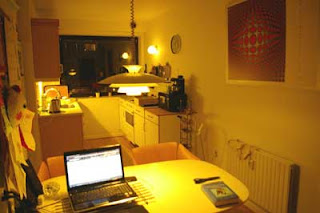 Okay, new year, new year's resolution to publish more posts on this blog. I was thinking this yesterday as I was going down to take some bits of cardboard to the paper recycling bin that's just outside our flat. Only thing was, when I got to it it had disappeared. That's strange, I thought, before I remembered it was New Year's Eve and the council have to remove all street containers lest firework wielding revellers turn them into impromptu bombs.

I wandered around a bit more until I came to a regular bin with a swing shut metal lid. I opened it up to stick the cardboard in (I wasn't waiting several days just to recycle a couple of pizza boxes) when I noticed the coffee machine that lay within. It was quite a nice one, Kenwood I think, and still in its box. In fact, on closer inspection, it turned out to be brand new. It was probably an unwanted Christmas present or something and someone had snuck out of their flat and rammed it into this bin in the street.

Now, being the scrounger that I am, I would ordinarily have taken it out and brought it gleefully home under my arm. I already have a coffee machine, but this one was brand new and more expensive looking than mine. The only problem was, it was covered in dog turds. Yes, that's right. Danish people, pretty much, all own dogs. Round where I live they also live in flats, hence lots of walkies, and lots and lots of doggy do. Most owners scoop it up by hand in a plastic bag - yes I too find it revolting, but some scoop up with a little spade and chuck it in the bin. I wouldn't be bringing the coffee maker home after all.

This got me thinking about trash, and how to get hold of it. Denmark is a veritable paradise for scroungers like myself. Living in the most wasteful nation in Europe has its upsides when you arrive here, sans everything, as we did three years ago. Early victims of the financial crisis, we rolled up with a small car, a few salvaged pots and pans from our previous life, a suitcase of clothes and two kids.

After a short stint at the mother-in-law's we were allocated a council flat near Copenhagen Airport and moved in shortly afterwards. The flat was spacious and modern and with underfloor heating (this is, after all, Scandinavia) but it was devoid of anything other than some kitchen units, a cooker and a fridge. We had jobs but no money, so the question arose: how do we furnish our flat?

The answer turned out to be: with remarkable ease.

Within only a couple of weeks I had filled it. The first stop was the local municipal dump. Here I found many of the bigger items, as people go there every day with trailer loads of, frankly, brand new stuff. Next I asked around and people were immediately glad that I would relieve them of their sofas, televisions and book shelves as it meant they could buy some new ones. Finally, an acquaintance was clearing out his office having decided it needed a total overhaul. A big skip arrived but before much could be put in it I liberated some of the designer furniture and modern art.

Nobody who has ever visited my flat would have guessed that practically everything in it was scavenged. Some of the furniture is a bit of a mix, especially by the ultra style conscious Danes, but hey - it was free. Of course, some things I had to buy. My laptop was purchased in a real store, as was the children's bunk bed. But most of their toys and clothes were not. Yes, shocking as it may seem, every week hundreds, if not thousands, of toys and bags of clothes (many designer labels) are put in the dump/recycling zone 30 seconds from my front door. There's practically nothing that you can't find there. Usually, once every week or two, someone will put their entire flat there. That's right, everything. TV, furniture, clothes, computers, CD collection - the whole lot will be stacked up neatly awaiting the men in blue overalls who will throw EVERYTHING into a big dumpster for delivery to the incineration plant. I got a new microwave last week - still in its box unused and with the warranty. I asked Michelle, who is Danish, why someone would throw out an unused microwave. "Probably because it's black - you'll be able to see the dust on it," was her reply.

My only regret is that I have no room for more. I have had to turn a painful blind eye to a remarkable amount of stuff that I have no space for. A few weeks ago the powers that be in our block took away everyone's bikes that didn't look like they'd been ridden in a while. the result was a hundred or so bicycles, ranging from creaking old granny bikes, to new-looking mountain bikes tossed into a crusher. And then there is all the furniture, the prams, books, CDs and DVDs (mountains and mountains of these), Xboxes, stereos, fishtanks and goodness knows what else. I've given up mentioning it to people because they look at me in a strange way when I tell them I get stuff from the tip (even though nothing I have taken has been in anything less than great condition). Some of my recents finds have included a complete set of 19th century Dickens's, a couple of antique brass wall clocks and a brand new set of expensive copper cooking pans.

It's remarkable, the level of decent stuff that is thrown out. Neither can it continue. The sheer amount of waste is only a by product of cheap oil and a consumer society geared up for a constant round of purchasing and disposing, both of which are now feeling the squeeze. Perhaps in twenty years time Danes will look back and remember the collosal amount of stuff they got through and wonder why they didn't hang onto some of it.
Posted by Jason Heppenstall at 9:37 PM