Spain: The End of the Affair 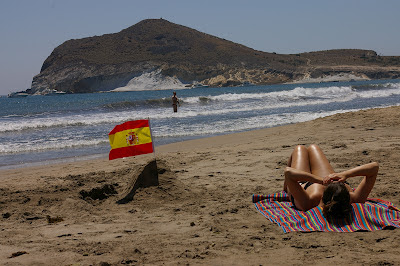 It's funny how journalistic narratives are supposed to play out. I have just spent the last week in Spain, finally divesting myself of the small farm that was to have been my life's work but instead turned into an albatross around my neck. In theory I should be writing about how everything is broken down there, how gangs of unemployed youths roam the streets in large packs and how lampposts are amply hung with the swaying corpses of those who could take it no longer.

But if I wrote that I'd be lying. Superficially at least, Spain appears to be utterly normal, if a little quiet. In fact I don't think I have ever seen it so well presented. There is the appearance of calm, at least. The new airport in Malaga is open for business and where, before, passengers could choose between coffee and orange juice at a single fly-blown cafe run by a friendly old man, they can now choose between about a dozen or more chain cafes, and blow their euros at numerous fashion and electronics stores.

Driving from the airport in Malaga to the small town in the mountains near Granada where I was staying, one is reminded though that all is not well. The country, for a while, was running on mega-projects and one of the grandest was to build a concrete ribbon of motorway so that one could travel all the way from Cadiz on the westward Atlantic coast to Barcelona on the northern Mediterranean coast. This was no easy job as Spain is mostly mountains and the road had to carve its way through terrain that just isn't very motorway-friendly. It was one of the projects that was supposed to bring the country into the 21st, no, 20th century but the only problem is that it remains incomplete. You get to La Herradura and a sign says 'End of Motorway' and spits you back onto the winding coastal road that was such an embarrassment for the regional government. The hills have been blasted ready to make way for the new road but judging by the layers of dust on all the machinery arrayed there, combined with the lack of workmen, it doesn't look like that road is going to be finished any time soon.

Along the same route I drove past a hill covered in the kind of poorly-built and ugly little apartments that the country now has several million of, and looming over them was a large sign declaring '€39.000 bank liquidación'. These would probably have sold for around €100,000 only a couple of years back.

I carried on driving, arriving late at night in the village in the mountains where I used to live. The last hour of the drive I had only passed one or two cars. I was able to keep the full-beams on practically the whole time without having to dim them for approaching cars. Was I imagining it, or had it always been this quiet?

In the daylight things seemed like they were back to normal. More beautification projects had been completed and the local town of Órgiva no longer looked like the shabby one I remembered. There was a new supermarket – the first 'proper' supermarket in the whole region – along with a new municipal swimming pool, football pitch, basketball court and a fancy new open air courtyard cafe where the patrons have misted water sprayed on them to keep them cool as they sip their Alhambra lagers. Crisis – what crisis?

It was only when I began to speak to people that I got the feeling the local economy was running on fumes. A friend had taken a job at a local cafe, working for peanuts she explained, as her builder husband stayed at home. He wasn't idle though, he was doing what he was good at – building – although now he was doing it for his family so that they would have somewhere to live on a piece of land that someone had lent them. Others were joining in, and soon they would have a small community of a handful of families living on a piece of land remote enough to make it unsellable, but fertile enough to make it livable.

I did my business with the lawyer and notary and spent a couple of days catching up with old friends and listening to their stories. One morning I went to buy distilled water for the batteries in my solar system, as the levels were beginning to get a bit low and the Mexican man who looks after my house in my absence has no transport and can't carry heavy loads. As I was purchasing some 5 litre containers in the small hardware store the next customer, stood behind me, was launching a spirited complaint against the store owner about a consignment of chicken feed he'd ordered but which hadn't turned up. The owner was saying something about supply problems and the disgruntled customer in the rough local dialect retorted 'Hombre, my chickens will have died of hunger by the time it eventually arrives.'

There was something familiar about the voice and I turned around and found myself looking at the English writer Chris Stewart. 'Problems?' I asked. He did a double take and stared at me. 'What are you doing here?' he asked 'I thought you lived in Denmark.' I explained all that had occurred to me. Chris Stewart, you see, was one of the original emigrees who, as he says, fled Thatcher's Britain and moved to Spain to become a shepherd, living a life of poverty in these here hills. He later wrote a book about it called Driving Over Lemons, which became immensely popular and persuaded thousands to follow in his footsteps. Like me. He was also the founding member of Genesis, along with Peter Gabriel, but he doesn't like to talk about that.

We chatted for a few minutes. I told him my theory that this was one of the better places to be. Several centuries of grinding poverty, famines and civil war had made this part of Andalucia resilient, I argued. Most country people over 50 still knew all about growing food and on top of that there had been a mass immigration of downsizers, such as himself, who treated the land and the water with respect.

Over the rest of my stay I had ample time to think about what was going wrong in Spain. It seems rather unfair that the Spanish people should be made to suffer. They are, after all, some of the most pleasant, helpful and down to earth folks on the planet. Cast aside, for a moment, all those stereotyped images of hot-blooded bullfighting macho types; in my experience the vast majority are family-centred, hard working and full of grace. Neither are they particularly materialistic above a certain minimum level of comfort.

It seems to me that Spain, as part of the EU, has had development rammed down its throat, whether they wanted it or not. The TV commercial for Spain used to be 'Spain – it's a little different' – and it was (and then some!). The task of the politicians was to make it the same as anywhere else. But all that infrastructure that was built seemed to be constructed primarily for the benefit of the hordes of northern Europeans who saw the country as one big golf course and luxury hotel development. Corruption oiled the wheels of illegal land development and speculators piled money into a 'housing' boom (they were not really houses, more like flimsy clinker shells) which was fuelled by the banks. It's a sad tale of environmental despoilation in one of the most beautiful places in Europe and now the local people are left with a toxic legacy of ruined coasts, damaged aquifers and unpayable debt.

As I left to return to Denmark I felt a wave of sadness. People kept telling me how lucky I was to be living in 'safe' Denmark. Soon I will have no further ties to Spain or La Alpujarra. It really does feel like the end of the affair.
Posted by Jason Heppenstall at 8:32 AM