Making an Iota of Difference

Yesterday evening I attended a talk by a man who lives in the nearby village of Mousehole. The talk was about creating sustainable communities - whatever they are - and was given by Anu van Warmelo. It took place in a Penzance venue called Open Shed, which is a kind of cafe where you can get your laptop or sewing machine refurbished and your bike repaired while you sip on a latte and flick through the latest issue of Resurgence. It's exactly the kind of place that I had been missing during my years in Denmark and, I was to learn, the kind of participatory open place where you can chat with the locals that's been heading towards extinction in recent years.

The talk seemed to get a good reception from the 20 or so of us in there, perched as we were on skip-rescued sofas and a farrago of old chairs. Despite the talk being called Creating Sustainable Communities the focus wasn't really on this, more it was an exposition of what makes certain communities and aspects of these communities more likely to be resilient in the face of change.

Some surprising examples of resilient communities were illustrated, and you can be sure that none of them were suburban tracts surrounding giant mega cities. American trailer parks, for example, could be seen as the ultimate in adaptive and resilient communities. You can move your trailer around at will (to escape bad neighbours or just for the hell of it) and when your daughter grows up she can buy her own trailer and plonk it next door to your own. Slums were also cited as places with masses of social capital in the absence of financial capital.

I was less sure of his example of Beverley Hills being a resilient community by sheer dint of the narrow world view of its denizens, comparable to a medieval village where nobody travels much and is disinterested in the wider world. Maybe it was meant as a joke.

Anyway, it was a thought provoking talk and it reconfirmed my prejudice that I'm now living in an area that will likely fare much better than other regions of the UK and beyond over the next century.

Activism has its place
I had to disagree. Not because I'm a naive clicktivist or placard waver who thinks that we can 'make politicians listen' while retaining our own comfy life styles - I'm not. Instead I believe that we will never know the direct result of our actions, most of which are too miniscule to be noticed on the micro level, but which can add up at the macro level and induce tipping points.

But just because they are minuscule doesn't mean they don't add up. After all, if Rosa Parks had chosen to stand up on that bus in 1955, black people in America might not enjoy the same civil liberties (or lack thereof) that everyone else enjoys in the United States. She could not have foreseen the outcome of this, moments before she parked her stubborn backside on that seat, but the subsequent furore was the spark that ignited a civil rights movement. Parks later wrote:

"People always say that I didn't give up my seat because I was tired, but that isn't true. I was not tired physically, or no more tired than I usually was at the end of a working day. I was not old, although some people have an image of me as being old then. I was forty-two. No, the only tired I was, was tired of giving in."

I can well appreciate that people in the environmental movement are tired of fighting against all that is wrong and destructive, and I know full well that some people burn themselves out in the process and become cynical and bitter. With large parts of the once-idealistic movement having been co-opted by 'the machine' is it any wonder that there's a distinct lack of hope?


But then, if everyone had adopted the 'it doesn't make one iota of difference' approach then would we have seen the recent banning of neonicotinoid chemicals by the EU? What about the far from perfect but still a step in the right direction decision to substantially scale back discarding fish by fishermen? There are plenty of examples, big and small.

Corporations don't rule the world, physics does
But in terms of the whole 'corporations rule the world so why bother' meme, I couldn't disagree more. Yes, corporations are too big and out of control - that's what happens when you let Big Capital grow too large. That does not mean they are omnipotent. They are still subject to the physicals laws of the universe, and they are very vulnerable to collapse. What's more, they are also very vulnerable to politics - let's not forget that politicians will always save their own necks before someone else's - even if that 'person' is a corporation. Just this year we have seen Tesco halted in its seemingly world-conquering expansion. It has abandoned stores in the USA, its profits are down and many of its customers have left to find something even cheaper and nastier (by the way, my first ever job was as a Tesco shelf-stacker at its first ever megastore, built on an irreplaceable SSI at a wildflower meadow just outside of Solihull).


Gandhi said that however feeble his own efforts seemed he slept safe in the knowledge that all empires, however mighty, will one day be no more. It seemed inconceivable when he said this about the British empire - but now look at it. To misquote another great philosopher, Adrian Mole, "I couldn't find Britain's remaining imperial possessions [the Falkland Islands] on the big world map spread out on the kitchen table until I discovered them underneath a cake crumb that Nan had dropped."


Industrial civilisation is also an empire. But it's not an empire built on ideology (are any?) but on the sheer logic and dynamics of the flows of cheap and abundant fossil fuels.  And peak oil means that big, increasingly, does not mean better. Big has become too big as in too big to fail. And if something is too big to fail there's a problem with the system because it means it will take down the whole edifice when it inevitably does fail.

On being a small furry rodent
So, sustainable communities, to me, means keeping out of the way of things that are too big to fail. A falling dinosaur can crush a lot of small furry rodents when it topples. In practice this means meeting people face to face (and not just online), about doing the things that you know are right with the materials, space and resources that you have at hand (however puny you might think these may be), about avoiding suicidal financial systems, getting a grip on your food supply and keeping yourself sane and healthy in the process. It also means linking up with like-minded people and trying to avoid spending too much time with those who have become too emotionally invested in business as usual.

Liquid lions teeth
This morning, after I've written this, I'm heading out to a traffic roundabout just down the road from here. I noticed yesterday that it was covered in yellow dandelion flowers. Perhaps it's just me but I immediately thought 'dandelion wine'! I'll use one of the demijohns I found in my father's attic after he died, and will take great joy in watching it ferment away and make plopping noises in the airing cupboard. At the end of it all I'll have several bottles of my own wine and the GDP and CO2 output of Europe will go an infinitesimal notch lower because I have not purchased any bottles of wine from Italy or France. Granted, it's not going to bring the supermarket system to a skidding halt, but it will make precisely one iota of difference. 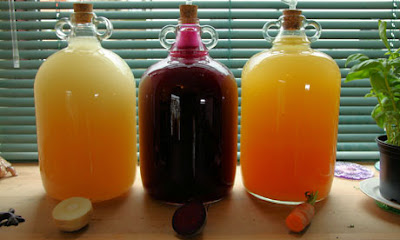 Posted by Jason Heppenstall at 11:19 AM

Email ThisBlogThis!Share to TwitterShare to FacebookShare to Pinterest
Labels: sustainability