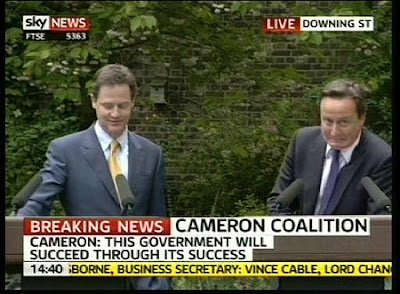 Okay, so I don't normally dip my toe into the foul and fetid waters of politics, after all one Endless Growth party looks like the next to me and it's been hard to tell the difference most of my adult life. But times seem to be changing because it is becoming increasingly clear that here in the UK we are RULED BY GOONS!

Most people these days might think that a goon is a kind of thug - and that would probably work here as well - but the definition I had in mind comes from the old radio comedy classic The Goon Show. So, according to the Urban Dictionary a goon can be a 'stupid or oafish person'.

Yep, we're being ruled by stupid or oafish people. You might think there are stupid and oafish people in Washington right now, but they are mere amateurs alongside our group of unintentional comedians. Seriously, slapstick would be a high art form in comparison to the high jinks our London lot get up to. Here's a list of things they have got up to in the LAST WEEK. Yes, in just a week (or maybe slightly longer in some cases, but no more than two weeks), they have been hard at work putting on their cabaret show with the following list of performances:

1 - Top of any Goonshow list has to be the Chancellor of the Exchequer George Osborne. Yes, this former Oxford graduate, former member of the riotous male-only dining clique the Bullingdon Club (the entry requirements of which include burning a £50 note in the face of a homeless person) is still telling us that the British economy is growing and that the worst is behind us.


This week George was on a trip to China, trying to woo them. He met lots of Chinese students and businessmen and then told British people that we were to stop treating them like factory drones and show some respect. Oh, then he offered to waive the visa rules for ultra-rich Chinese businessmen and furthermore offered the Chinese the chance to run 100% of Britain's future nuclear power stations.

As if the prospect of this was not scary enough, we were also told that we could soon be policed by foreign police forces - our own presumably being too expensive. So, we can imagine, when some Chinese tycoon decides to build a nuke down the end of my road, I can expect ex Red Army policemen to clobber me and any attempt to protest.

Other Osborne moments this week include the demolishing of his housing bubble inflator policy instrument 'Help to Buy' by the newly minted Nobel economist Robert Shiller. Read all about it via the Automatic Earth here.

2 - Second in the Goonshow hit parade is Envrionment Secretary Owen Paterson - the man charged with looking after the environment - saying that climate change was 'not all bad'. Yes, there are bright spots, according to him. It will be warmer, chuckle, and we won't have to fly to Spain for holidays. What's more, he said, not so many people will die of cold in the winter (see below) which, for some reason, he seems to think is the 'leading cause of death for humans' (?). He also revealed that some people take it all too seriously and should just try and relax a bit and have some fun.

3 - And Owen Paterson is in third place as well. The long protested-against badger cull has been proceeding now for some weeks, with many of the furry mammals beloved of Beatrix Potter and Queen's Brian May having been forced to eat hot lead in order to appease the Tory-voting farming unions. Alas, when marksmen failed to notch up enough black and white corpses the 'scientific cull' was deemed a failure. 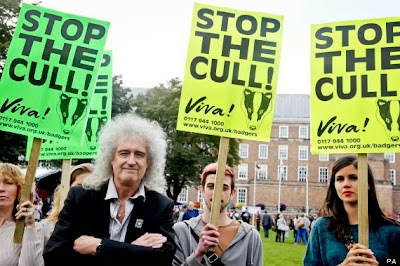 Who is to blame for this debacle?

The badgers themselves, of course. Mr Paterson says the creatures 'moved the goalposts' - presumably by resisting being genocided. Scientists all along had said that the cull was pointless and unscientific, but farmers wanted 'something' done about the spread of TB into their herds of cattle.

4 - In fourth place - although he usually deserves to be a lot higher up - is our leader and fellow Bullingdon Club goon Mr David Cameron. Mr 'C3PO made out of Spam' rattles off any number of jaw-droppers every time he opens his mouth, but what clangers has he come up with recently? Well, there's that picture of him asleep on a bed with his secret red box that was posted on Instagram by his sister in law as she was getting dressed (!).


Then there was the repeated claim that shale gas drilling is beneficial for the UK following the 'amazing' success story in the US.

And then there was the woeful privatisation of the Royal Mail overseen by his government this week - reminiscent of the lowest 'greed is good' days of the Thatcher era. The Royal Mail, which is approaching its 500th birthday, was sold off dirt cheap, with the lion's share going to big City firms. Little investors were also eager to grab some shares and cash them in, and the Daily Goonagraph - sorry Telegraph - even had a moving share ticker as its headline, showing how much dosh 'the little man' was making minute by minute.

Today, fearing for their jobs (and rightly so), workers at the newly privatised organisation voted to go on strike.

Finally, still with Cameron, following today's announcement by British Gas that it will raise its prices another 10% or so - even though many people now cannot afford to eat and heat their home - announced that people should ditch the company. Never mind that the, er, competitors will all follow suit and that his own government revealed that it is cutting money set aside to insulate poor people's homes.


Oh, and one last thing, Mr C using his most threatening growly voice has said the Guardian newspaper should be 'investigated' for publishing NSA revelations. This follows on from the new press charter that is being put into place that will severely restrict what newspapers are allowed to say about our illustrious rulers. Here's Private Eye's (ever welcome) take on it all. 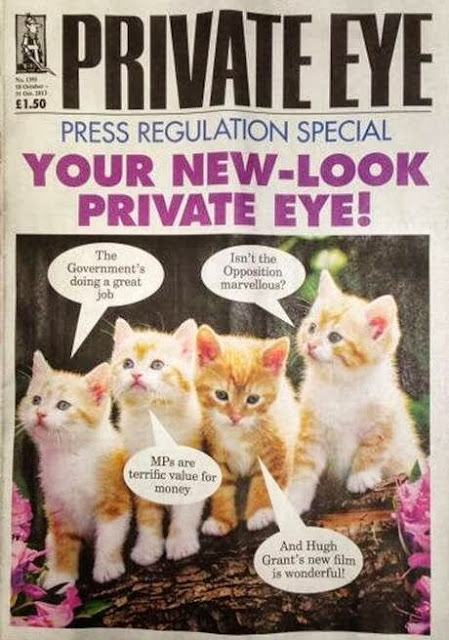 5 - In fifth place is the entire Foreign Office, who with perfect timing, announced that the UK is to become the 'hub' for drilling the bejesus out of the Arctic to get at all the oil and gas there. Yes, just days after 30 mostly British members of Greenpeace were arrested and slung into the Gulag by Russia for protesting against Arctic drilling, and only weeks after the IPCC reconfirmed that we are going to hell in a hand basket unless we stop burning fossil fuels the FO deems it a good time to make this bold claim to getting a 'piece of the action' up north. It's great to know that the government is concerned about the climate.

6 - In sixth place is our favourite parliamentary clown Owen Paterson again. This time he really pushed the boat out by saying that opponents of all that nice genetically modified food stuff that his big business pals want to force upon the world are 'wicked'. Yes, that would make people who oppose GM food evil. They are apparently guilty of 'killing millions of innocent children'! Well I never.


7 - No list of Tory goons would be complete without London's 'Lord' mayor Boris Johnson aka BoJo. He doesn't have to do anything other than just continuing to exist to be included on any goon list, but here he is, saying that all English school children must now learn Mandarin rather than French. To force home this point, he flew over Hong Kong in a helicopter earlier today having being voted 'England's most patriotic politician' - thus the Churchillain repose.

8 - In eighth place a joint award goes to 80% of the UK population who failed to notice any of the above because they have become obsessed with a) A TV programme about baking cakes, b) A TV programme about celebrities doing ballroom dancing and c) A TV programme which features a couple having sex in a box in front of an audience which is then analysed by a panel of 'sexperts'.

Oh, and the football was on (England won).

Ever feel like the kids are in charge at the kindergarten?

As George points out in his comment below, I forgot to include the Education Secretary Michael Gove.  No gallery of goons would be complete without the man who is pushing through such draconian - and frankly pointless - education reforms that teachers refer to him as the 'school bully' and even went on strike against him yesterday. 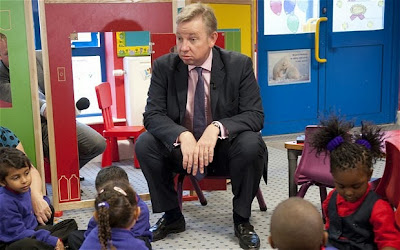 Eric Pickles, Secretary of State for Communities and Local Government, who publicly told a woman who had been historically abused to "Adjust your medication," after he refused to help her out.

Okay … that's enough (I know, I should have mentioned William Hague)!

Posted by Jason Heppenstall at 11:49 PM