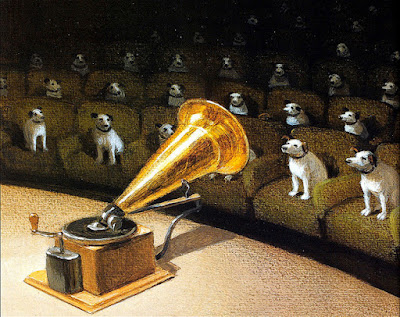 This is just a short rhetorical interlude about the tone of voice used on the various blogs, podcasts and sites that discuss issues surrounding collapse. Because, it occurred to me, that the tone of voice used represents a conundrum. The majority of the more widely-visited sites use an authoritative 'master's voice' i.e. "X is X because of Y, and don't you dare quibble with me." These are the guys who sell books and make a living by being collapse pundits.

Then we have the other flavour of collapse site which could be characterised as  being more open to discussion. The tool used to jemmy open the various complex topics and challenging subjects is one of enquiry, and there is a tacit acceptance that having a whole bunch of different educated opinions is more useful than having a single authoritative voice booming down from the impenetrable heights of Mount Collapse Blog.

I'm not saying that either is the correct approach. I'm more than grateful to those writers and thinkers out there who efficiently state their case with authority and clarity, and in fact I tend to lean towards them in helping clarify my own thinking. But it takes a kind of self-confidence that I am not in possession of to be able to talk that walk. One must have sound academic credentials, or have lived through a collapse, or be a professor of something in order to able to pull that one off.

And it's a puzzling thing too, because the more you learn, the more you realise how little you know about how the wider systems work and how they interact with one another. There's the irony. I've hobnobbed with a few of the grey-beards and privately they're a lot less sure of things than they sound when their words are printed on a page. Perhaps it's merely the charged atmosphere of the collapsosphere - the "my intellectual model of reality is bigger than your intellectual model of reality" mentality that is at play. I accept that. If one sounds uncertain of one's opinions then your enemies will seize upon this as a weakness.

Of course, there are some things we can all agree on - things where anything but an authoritative voice would be a cop out. Infinite growth cannot continue on a finite planet. Printing money is no substitute for creating economic value. Oil production will peak and fall over time. Pumping carbon dioxide into the atmosphere will have a greenhouse effect. These are all indisputable facts that are often contorted and twisted in our age of illusions. We can agree on that, I hope.

I hope to be able to strike a middle ground. Not to be too wishy-washy, but I accept that there are many things out there that I don't understand or only have a limited understanding of how they interact with a wider reality. History is full of curve balls and sudden crashes. That's why I value the input and opinions of a variety of different voices, even if they sometimes conflict with one another.

Will human civilisation crash and burn in the next twenty years or will we simply evolve into new species and carry on for a few million years? Will this herd of short-sighted humans plunge en masse off Seneca's cliff or pass slowly into the twilight lowlands of simplified technology and minimal energy availability over the next few centuries? Who knows? Nobody really knows, but the fact that we cannot achieve intellectual closure on these issues doesn't make them any less interesting to consider. I have a friend who is into crop circles. He's been studying them for decades and, during that time, has seen people come and go from the field (no pun intended). These people have come onto the scene guns blazing, claiming to know what the circles are and what caused them - and inevitable they have left with their tails between their legs in a matter of months or years as their theories have been disproved.

My friend has maintained his position as an 'expert' merely by admitting that he doesn't know what they are. The more he studies them, the more he learns and - perhaps - the less he understands, but he has avoided taking the bait of intellectual closure. Instead he continues to research and learn, always with an open mind and wary of the fact that he is operating on the extreme intellectual margin. Ironically, in these times where reason trumps intuition, this makes him something of an expert.

So how much intellectual grasp do we need? And is this achieved through listening to some top-down authoritative voice, or by taking part in online bear pits where every opinion is equally as valid? What, in fact, are our objectives here?

Anyway, it's just something to ponder as you browse your favourite blogs.
Posted by Jason Heppenstall at 10:45 AM