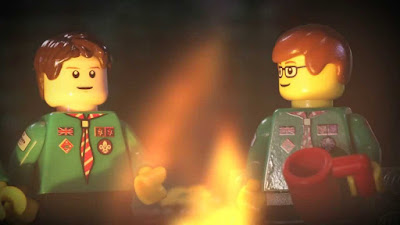 As a youngster I was a member of the Boy Scout movement and the motto that was drilled into us was “Always be prepared.” Prepared for what? Prepared for whatever life throws at you, was the answer I got. It seemed a pretty reasonable idea to my eight-year-old brain. By training us young boys (and girls, if you were a Brownie) we could learn to pre-empt danger by thinking about the given risks of any situation and either prepare accordingly or choose to avoid the situation entirely.

So how has it happened that we have ended up with a society whose motto seems to be “Never be prepared”?

Watching the wild gyrations of the major stock markets of the last few days I noticed a couple of things. When things looked like they were going to get bad, the TV and internet pundits generally said: “There’s nothing to worry about, this situation can’t possibly happen.” And then when things actually did get bad they tended to say “Oh, well we knew there was always a risk of this happening and it’s time we faced up to the fact that what we feared most but had left unsaid has come to pass.” And then, when the dead cat bounce took the markets higher again the pundits trotted out and said: “Everything is fixed! We told you there was nothing to worry about!”

The average small investor (if there is such a thing anymore, outside of China) must be squirming on his couch clutching his head as spasms of cognitive dissonance rack his body. “But they said it couldn’t happen!”

Yet one person who couldn’t ever be confused with a TV finance pundit this week was Labour MP Damian McBride, who advised his Twitter followers to stock up on canned food and water, withdraw their cash and agree a rallying point with friends in family in case of communications breakdown and civil disorder. 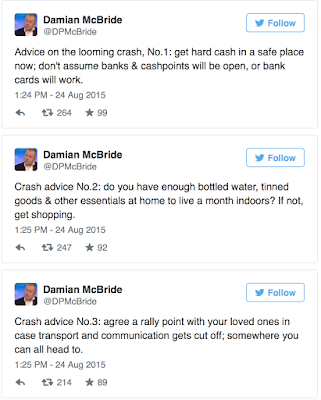 He wasn’t mincing his words.

And McBride isn’t just some lowly backbencher either – he was Gordon Brown’s adviser when he was prime minister, as well as being a senior civil servant at the Treasury. As such he must know more than most people how fragile the global financial system is.

Predictably enough, he was roundly mocked by the press for being alarmist. Twitterers everywhere joined in with the two-minutes’ hate. In a world where sentiment is more important than reality such boat-rocking cannot not be allowed to pass.

The news message right now, as I type these words, is that markets have recovered from their panic attacks (even though this is patently untrue). China has calmed the waters by lowering its interest rates (what they still have interest rates above zero?) and there is soothing talk of more stimulus measures. The long-feared rate hike in the US is also being talked down. Nothing to see here, move along.

If current newspaper editorials and TV finance channels could be stuffed together into a cultural blender and reformed into the medium of music they would emerge as some kind of gently soothing mood music – the kind they play in dentists’ waiting rooms in the hope that it’ll drown out the noise of the drill and cries of pain coming from the next room.

Of course, none of this matters at this point because what this week’s market carnage has shown is that central banks are not omnipotent and they may even be running out of pumping power for all the epic mega-bubbles that have been created in recent years. Even those who haven’t been paying attention must now surely be able to see that unleashing quantitative easing (i.e. printing money) is simply an exercise in transferring the private risk/debt of the rich into public hands. You can unleash the monetary floodgates all you like and watch as all that liquidity flows into the feeding troughs of the world’s financial centres leaving the real – productive – sectors of the economy high and dry while wrecking many of the aspects of modern life that allow us to consider our societies as civilised.

This is certain to have real consequences in the real world as levels of debt continue to skyrocket, and the ability of the real economy as a whole to repay that debt diminish by the week. You can extend your credit limit to the Moon and back, but if your income is falling and you keep piling on the debt then you must know that some day there will come a knock at the door. So should individuals prepare for the ensuing calamity that this moment of reckoning will bring into being? Or should we just sit there on our hands humming Everything is Awesome and hoping that the moment will never come? 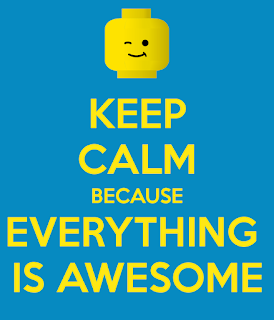 *I just checked the Cub Scout’s website and – sure enough – their motto is still “Be prepared” – even if it now has far fewer members than it did in the 1970s and is embroiled in a sexual politics wrangle.

Posted by Jason Heppenstall at 9:34 AM