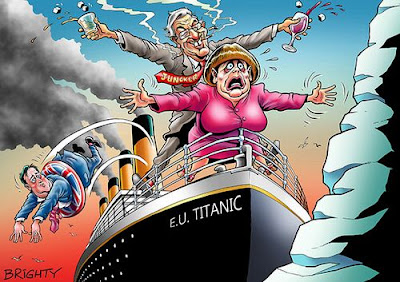 Well, that went well didn't it? I stayed up all night watching the results of the EU referendum come in. I hadn't meant to, because we had been told there was almost no chance 'Leave' would win it. But win it they did. It was around 1:30am when the result from Sunderland came in, showing a shock 61% in favour of leaving the EU. The BBC - that turgid voice of the senile elites - seemed unsure what to make of it. Surely this is just an aberration? I decided I'd better make some coffee for what promised to be a long night.

The birds had already been chirping for a couple of hours when the stunning result was finally announced. 48% had voted Remain and 52% had voted Leave. Hardly a huge victory, but a victory nevertheless in the teeth of the biggest domestic propaganda campaign in living memory.

And then the fallout began.

It's fair to sat that the reaction from those who didn't like the result has been somewhat disappointing and doesn't bode well for future crises. Now, 10 days later, with the rubble from the initial collapse is just beginning to stop bouncing, it appears that a huge chasm has opened up in Britain and the people are left standing on either side of it. The quiet hopeful dignity of most of the Leavers is in stark contrast to the shrill anger of the more vocal Remainers, for whom the sky has fallen in. There are demands for a second referendum, demands that the result be overturned and demands that the legal system be used to prevent the status quo being upset.

People are gnashing their teeth and wailing. I've heard of some holding grief parties, and others proclaiming that we now live in a fascist state. There is a frantic scramble to move to Scotland or Canada or some other state that is perceived to be 'tolerant and open'.

More sinisterly, in the immediate aftermath a media narrative has been allowed to flourish that a wave of race hatred has been unleashed by the vote. I don't buy it. Of course, you will get some racist idiots in any situation, and the videos of them I have seen tend to show drunk young men on public transport mouthing off. Does it make a difference to the statistics when newspapers such as The Guardian exhort their readers to send in their clips of racist/xenophobic attitudes and an app has been developed to capture such taunts? Would it make any difference if I said I had a friend who had openly talked on Facebook about travelling in a group to meet the returning England football fans from the ferry and provoke them into doing or saying something nasty for the benefit of the cameras. The temptation to be agent provocateur seems too tempting to some people.

To get an idea of the size of the gulf that's opened up it is instructive to watch these two short videos, one after the other. In the first one, Leave voters - who are more or less characterised as universally racist and/or stupid by Remainers - explain their reasons for doing so. The second video shows a woman in London explaining her fears following the referendum.

Video 1: Why we Voted Leave: Voices from Northern England

I'm not exactly a huge admirer of ex-London Mayor Boris Johnson - who spearheaded the Leave campaign (seemingly without much of a plan of what to do if victory ensued) and then quit when he won - but I'll finish off this short post by quoting what he wrote yesterday about the kind of feeling this referendum has unleashed in young people. Of course, Johnson is a buffoon and a joker and he revels in being offensive, but then jokers can say what they want and get away with it, so perhaps they deserve to be listened to sometimes.


"On Friday I heard a new dawn chorus outside my house. There was a rustling and twittering, as though of starlings assembling on a branch. Then I heard a collective clearing of the throat, and they started yodelling my name – followed by various expletives. “Oi Boris – c---!” they shouted. Or “Boris – w-----!” I looked out to see some otherwise charming-looking young people, the sort who might fast to raise money for a Third World leprosy project.

They had the air of idealists – Corbynistas; Lefties; people who might go on a march to stop a war. And so when they started on their protest song, I found myself a bit taken aback. “EU – we love YOU! EU – we love YOU!” they began to croon. Curious, I thought. What exactly is it about the EU that attracts the fervent admiration of north London radicals? It was the first time I had ever heard of trendy socialists demonstrating in favour of an unelected supranational bureaucracy.

In the old days, the Lefties used to dismiss the EU as a bankers’ ramp. Tony Benn thought it was unacceptably anti-democratic. Jeremy Corbyn used to vote against it in every division. Why has it suddenly become so fashionable among our nose-ringed friends? I tried to think which of the EU’s signature policies they were so keen on. Surely not the agricultural subsidies that make up most of the budget, and that have done so much to retard development in the Third World. They can’t – for heaven’s sake – support the peak tariffs that discriminate against value added goods from Sub-Saharan Africa. Nor can they possibly enjoy the sheer opacity of the system – the fact that there are 10,000 officials who are paid more than the Prime Minister, and whose names and functions we don’t know.

They can’t really be defending the waste, the fraud – or the endless expensive caravan of crémant-swilling members of the European Parliament between Brussels and Luxembourg and Strasbourg. Are they really demonstrating in favour of the torrent of red tape that has done so much to hold back growth in the EU? It seems an odd sort of campaign theme: what do we want? More Brussels law-making! When do we want it? Now!

Naturally, Lefties might want laws to protect the workforce – but they would surely want those laws to be made by politicians that the people could remove at elections. No: the more I thought about it, the odder it seemed. It was incredible that these young and idealistic people should be making a rumpus about the euro – the key policy of the modern EU – when that project has so gravely intensified suffering in many southern EU countries, and deprived a generation of young people of employment.

Perhaps, I mused, it was a general feeling that the EU was about openness, tolerance and diversity. But they must surely know that the EU’s rules on free movement mean a highly discriminatory regime, one that makes it much more difficult for people from outside the EU to get into Britain – even though we need their skills.

So what was it about? People’s emotions matter, even when they do not seem to be wholly rational. The feelings being manifested outside my house are shared by the large numbers of people – 30,000, they say – who at the weekend came together in Trafalgar Square to hear pro-EU speeches by Sir Bob Geldof. There is, among a section of the population, a kind of hysteria, a contagious mourning of the kind that I remember in 1997 after the death of the Princess of Wales. It is not about the EU, of course; or not solely. A great many of these protesters – like dear old Geldof – are in a state of some confusion about the EU and what it does.

It is not, as he says, a “free trade area”; if only it were. It is a vast and convoluted exercise in trying to create a federal union – a new political construction based in Brussels. But, as I say, I don’t believe that it is psychologically credible to imagine young people chanting hysterically in favour of Brussels bureaucrats. The whole protest is not about the EU project, per se; it is about them – their own fears and anxieties that are now being projected on to Brexit.

These fears are wildly overdone. The reality is that the stock market has not plunged, as some said it would – far from it. The FTSE is higher than when the vote took place. There has been no emergency budget, and nor will there be. But the crowds of young people are experiencing the last psychological tremors of Project Fear – perhaps the most thoroughgoing government attempt to manipulate public opinion since the run-up to the Iraq War.

When Geldof tells them that the older generation has “stolen your future” by voting to Leave the EU, I am afraid there are too many who still believe it. It is time for this nonsense to end. It was wrong of the Government to offer the public a binary choice on the EU without being willing – in the event that people voted Leave – to explain how this can be made to work in the interests of the UK and Europe. We cannot wait until mid-September, and a new PM."
Posted by Jason Heppenstall at 9:10 AM