E is for EROEI

Understanding EROEI - or Energy Return On Energy Invested - should be on every school curriculum, but isn't. Simply put, it's the amount of energy we as a species can play with. Back in the days when you could poke a hole in the ground and oil would gush out of it skywards, getting hold of plenty of energy was easy. In fact, for every blob of oil you used for locating, drilling and transporting the stuff, you got between 100 and 200 similarly-sized blobs of the same quality back. The way this energy value was expressed was by way of EROEI; thus, sweet onshore crude oil could be said to have an EROEI of 100 to 200. These were the low hanging fruit days that made the 20th century boom.

Once all the low hanging fruit was gone we had to move a bit further up the tree. Oil and coal and natural gas were still abundant but they needed more work to get at. They also needed more processing, transporting and all the rest of it. Because of this, the net energy (i.e. energy return minus energy expenditure) available to us was lower. We invested one blob and got considerably less than 100 back. In other words, the energy we invested in unlocking fossil fuels needed to be higher just to get the same amount back that we were used to, meaning the EROEI was falling.

Of course, fossil fuels aren't the only forms of energy. Nuclear was thought to have a high EROEI, but once you took into consideration the entire process of building the power stations, mining the uranium, decommissioning the plant and storing the waste, the EROEI shrivelled up like dead fish in the sun at Fukushima Beach.

Renewables also have relatively low EROEI values compared to early oil. Note, however, that EROEI has nothing to do with money. Getting EROEI mixed up with EROI (Energy Return on Investment) is a common mistake. One deals with the immutable laws of physics and the other deals with the infinitely manipulable world of finance - and only one of these sets of conditions is negotiable.

So what would be the average EROEI value of oil discovered today? Unfortunately nobody can seem to agree on an exact figure, but you can be sure that it's a lot lower than 200. 20 perhaps. In fact many insist that fracked shale gas and tight oil have such a low EROEI they are only viable as a commercial operation when financed by Wall Street Ponzi schemes. Biofuels, such as ethanol, have disastrously low EROEI numbers - in many cases they are less than 1. When you put more energy into something than you get out of it then it can no longer be regarded as a fuel source. Nevertheless, biofuel volumes are often added to 'total liquids' figures, implying they are an oil substitute when clearly they are not.

People will often say that 'the world is awash with oil' because they see it on the news all the time. They see no reason to think scarcity exists - everywhere they look they see abundance. However, there's a problem with this kind of thinking, and the problem is that our net energy levels are shrinking. Yes, shrinking! We can cover the world in wind turbines, solar panels and fracking wells, and we still can't escape the shrinkage problem. We might be producing, say, ten million barrels of oil per day - which looks great on spreadsheets and in news articles - but what good is that if we are then spending the bulk of it to do more drilling to get at more oil that will have an even lower EROEI value?

Which leads us to the crux of the problem. The modern world was set up to run on high EROEI energy. Take a look around. All those roads, airports, microproccesor factories, mechanised agricultural systems, globalised supply chains and space programmes require a huge throughput of energy. But we are running out of high EROEI energy, and will soon have only low EROEI energy to play with. Which begs the question: at what average level of net energy will the modern world cease to be a viable option? In the past, when high energy fossil fuels were abundant, you could always throw more money and energy at problems and expect them to go away - and usually they did. But this option itself is now going away. What will we do? 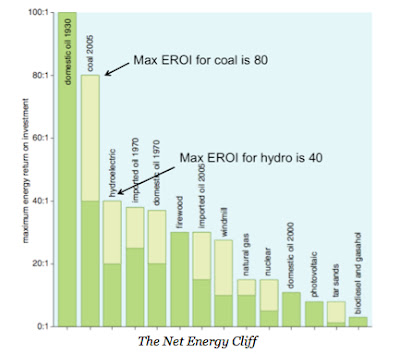 Proponents of renewable energy will say that we can simply swap out the old system for a new 'clean and green' one. We'll all drive electric cars, live in solar cities and our lifestyles will not be much different to what they are today. This vision ignores many of the other limits to the system, and would still permit the continued destruction of the planet's life support systems, albeit in a more 'green' fashion. That's not to say that renewable energy isn't extremely useful - especially in a locally-distributed way - just to recognise some of its limits.

On the other hand, fossil fuel dinosaurs claim that we should just go all-out for oil and gas and coal. If there's such a thing as EROEI or global warming or acidifying oceans then they don't want to hear it. We should be fracking the living daylight out of the planet, building pipelines and fighting wars to get 'our' oil out of the Middle East. These people are a type of modern day cargo cult and as such, are quite dangerous. Many of them are politicians and leading businessmen.

There's a third category, too. The techno cornucopian optimists insist that a new technological breakthrough is just around the corner that will allow us to live like we do with no interruption to service. Haven't you heard there's a government conspiracy to cover up the availability of free energy? Or that if we can send robots up into space to mine comets for uranium we can have endless energy? Selling dreams is a profitable business, and the most successful of these people have MBAs and hire the best PR staffers. I myself once pretended to be one just for fun and have had several requests for an investment prospectus from people with money.

So what is likely to happen as these groups fight it out amongst each other while, all along, the needle on the global EROEI fuel tank moves into the orange zone? Perhaps it will be like the hand of God slowly turning down the dimmer switch on industrial civilisation. Because the more energy we USE simply to GET energy, the less energy is available for the rest of society to use. And this manifests itself in many different ways, but it all comes down to lower available net energy. Already we are seeing demand destruction and lower energy use as the former consumer classes struggle to be able to afford as many goods and the corresponding energy they use. Heavy goods vehicle traffic levels have fallen over 6% across the UK in the last decade, councils are turning off streetlights at night, and homeless levels in the US are spiking. Sweden is encouraging its citizens to refurbish goods instead of buying new ones, malnutrition in children is becoming common in the developed world and 30-something Britons possess half as much as 30-somethings did only 10 years ago [*See links below]. These are just some signs that the big squeeze is on, and it's getting tighter and tighter with each passing year.


Posted by Jason Heppenstall at 2:28 PM