O is for Ouch! 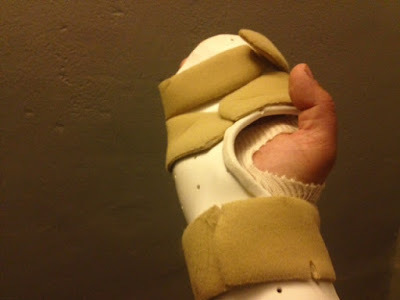 Hello everyone, just to say that I'm not writing much at the moment as I've had a little ... accident. As you can see from the picture, my right hand is not fully functional, and given that it's my writing hand I'm forced to type with one finger on my left hand.

Yes, two weeks ago I was cutting through a steel pipe with an angle grinder when the tool caught an edge, banged against a wall and rebounded onto the back of my hand. Luckily, I was at home when it happened, which is a five minute walk away from the nearest hospital. Once there they ascertained that it was serious enough to be sent to the regional hospital, and I emerged two days later having had an operation to sew together a severed tendon and dig some fragmented disk out of the bone.

Although I've been using power tools for 25 years, this was my first experience of anything going wrong. It was a silly mistake that could have been avoided, and I've learned my lesson. I also got to learn a few things about the health system here, and got a free mini-break in a nice hospital with nice doctors and nurses. So, much humbled, I'm back home and recuperating.

Anyway, I'm pretty much handicapped for three months while it heals, which has torpedoed most of my work projects. At least I can catch up on a lot of reading - it could have been a lot worse.

In other news, I'm sad to report that heretical polymath and fellow peak oiler Liam Scheff passed away earlier today aged 45, having written this note. I wouldn't claim to have been a friend of Liam, having only become aware of his work six months ago, but I interacted with him quite a few times on social media and appreciated his rapier wit and sharp thinking. The tale of his demise is a sad one, but he bowed out lucid to the end and with true spirit. He was definitely one of the good guys - I've got his book Official Stories on order.

Posted by Jason Heppenstall at 11:49 PM