New Book - The Olive Press: News From the Land of the Misfits


For those of you who may have been wondering what I’ve been up to for the past few months I can reveal that I’ve been writing – and publishing – my latest book. The Olive Press – News From the Land of the Misfits is my third and most ambitious book yet, and it took over 10 years to surface.

The book is a kind of a memoir of the time when I lived in a small farmhouse with my family in the mountains of southern Spain. I soon discovered that the idea of trying to be completely self-sufficient by growing my own food and producing my own energy using solar panels was an unrealistic one. With a young family to feed I had to also find a way of making money, so I hit on the idea of starting a newspaper.

The Olive Press was a kitchen table effort, and I had no journalism or editing experience to fall back on. Luckily, I met someone who said he was a journalist and so the two of us put the gears into motion and began to produce a small newspaper for the local area. The name came to me when I was listening to one of my neighbours complain about the poor prices he was being paid at the local olive press. Aha – I thought – what a great name for a newspaper. 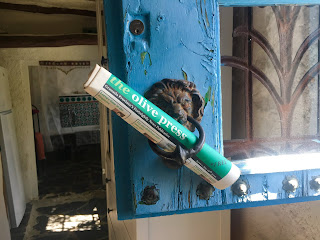 It was somewhat peculiar and very beautiful region of Spain we were living in; a land of mountains and rivers, and of bountiful orchards and chestnut forests – in other words, quite unlike what many people assume Spain to be like. It was also one of those places that seemed to attract square pegs who had not managed to fit into any round holes elsewhere – these are the misfits of the title. Incidentally, I considered myself a misfit too. La Alpujarra, as the region is called, is situated between the Mediterranean sea and the Sierra Nevada mountains, just south of the lovely city of Granada. It was here that the Moors held out against the Catholics after 1492, creating a kind of earthly paradise by using their advanced knowledge of irrigation. It's an ethereal region of whitewashed villages and clear light where old traditions linger on and the 21st century lies just out of sight behind the mountains. There are buddhists and sufi mystics and all sorts of other misfits living peacefully in the hills there.


I found myself moving there having read a book called Driving Over Lemons, by Chris Stewart, which detailed how the author ‘escaped Thatcher’s Britain’ and lived the life of a penniless hill shepherd. It was that kind of place where everything seemed possible. At the time, I was feeling like I needed to escape the treadmill of tedious jobs I’d found myself on, and I wanted to move somewhere our kids could roam around and be free instead of suburban Copenhagen.

We started off living in an old (haunted, we discovered) stone house village high up in the mountains, but after about a year we bought an old tumbledown farmhouse in the lower foothills and set about converting it into a liveable building and a smallholding.


Not long after setting up the newspaper we discovered just how difficult it was to make it pay. We employed a professional salesman, and he at least managed to save us from going bust inside the first year - although there was a cost to pay. I should probably have mentioned that The Olive Press was an unusual newspaper in that it exposed corruption and was all about protecting the local environment from the numerous businessmen who wanted to cover the entire region in plastic greenhouses, golf courses for the rich, and concrete 'urbanzations'. The anti corruption focus came from my journalist business partner, while the ‘green’ agenda came from yours truly. In retrospect, we were too idealistic to run a business, and it's a wonder we lasted as long as we did.

Our salesman brought in some big-paying advertisers, but the price that we had to pay was that we couldn’t be so controversial. We tried to behave but to be honest, we didn’t know what we were getting into. It wasn’t long before eyebrows were being raised and angry real estate agents were dumping our newspaper into bins and calling us ‘commies’ (we weren’t!). They said our focus on the wanton destruction of the environment by big agribusinesses was putting off investors in the region.

Another journalist came on board – this time a qualified one with a Fleet Street pedigree. He dragged our minnow of a newspaper into a much bigger pond, and it wasn’t long before we were involved in several high-profile spats – including one that could be reasonably identified as one of the first dominos that would topple Tony Blair’s government. All of a sudden we were in hot water and the pressure we were under led to internal conflict.

I bowed out after a couple of years, selling my share and doing whatever work I could find just to keep our heads above water. For the most part I earned money by working on building sites and delivering newspapers. We grew and ate what food we could but the financial crisis was beginning to bite and this had huge knock-on effects around the region.

Eventually, of course, the crisis of 2008-2009 engulfed almost everyone and we ended up almost losing our shirts. We found ourselves back in Denmark again (where my wife is from), sharing a single room and working jobs that we both hated. After a few months we were allocated a council flat and it was around this time – having experienced first-hand what an economic crisis looked like – I discovered the writings of Michael Ruppert, John Michael Greer, James Howard Kunstler and others, which led to the creation of this blog. Indeed, my brush with collapse had provided me with invaluable experience of what happens when the rug is pulled out from under you.

I wrote most of the book soon after, but couldn’t find a publisher who would let me mention peak oil or the various environmental problems that spurred me on to produce the newspaper in the first place. Discouraged, and with other projects on the go, I saved the story on a memory stick, stuck it in a drawer and forgot about it.

I rediscovered it last year, and found myslef chuckling as I read the various chapters which had survived (many were corrupted – ironically by oil that had seeped into the chip from the surrounding casing - which was an advert for Hanover Airport with a floating toy airplane in it). Given that self-publishing had come a long way in the intervening decade I set up a small imprint and went about re-writing the book. This proved more arduous than I had thought, and there were legal implications for detailing real-life events. I had to re-write the entire thing at least twice, adding in extra chapters and cutting out large parts. At one point the manuscript was over 500 pages, so I had to slim it down quite a bit to make the story more readable. I even quit my job so I could focus on getting the book completed.

So anyway, The Olive Press – News From the Land of the Misfits is about that wild ride, but it’s not in any way a gloomy book. In fact there are parts of the story that are very funny. Oh, and it isn't just about my story; in the book I chronicle some of the inspiring and remarkable people I met who are working to regenerate the natural environment in Spain, as well as various other interesting people I got to hang out with, such as an on-the-run chef and a few famous and not-so famous personalities. Of the (so far few) people who have read it, they have all given it five stars and recommended it – I couldn’t ask for more.

Incidentally, the newspaper is still going strong and is now the largest foreign publication in Spain. It has four offices dotted around the country, including one in Gibraltar, although I can’t claim any credit for its success as it has changed quite a bit since I waved goodbye.

If you’d like to read The Olive Press you can buy it at all the various Amazon sites, as well as download the ebook, and - for those who want to avoid enriching Jeff Bezos even further - I believe it should also be available on sites such as Barnes & Noble in the next few weeks. 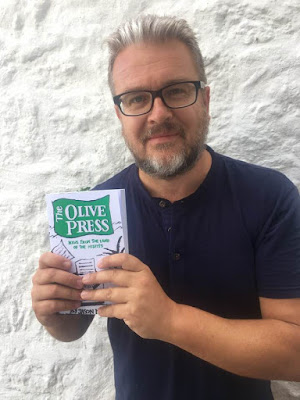 Posted by Jason Heppenstall at 1:38 PM