Peak Oil and Denmark's response to it 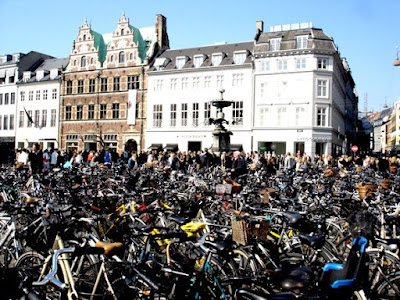 H.G.Wells said that he felt hope for the human race every time he saw an adult riding a bike. If he were alive today (or perhaps came to visit in a time machine from one of his stories) he’d no doubt be horrified to see people driving around in SUVs and Humvees. Bring him over to Copenhagen though and I’m sure his spirits would be restored.

Why? Well, everyone knows that Denmark is famous for its bicycles. It’s probably fair to say that this is the best country in the world for getting around on two wheels – and for once, no exaggeration is needed – and when I leave one day, as I inevitably will, it’ll be the bikes that I’ll miss the most.

Consider this. According to the British motoring organisation the RAC, the average annual cost of running a car in the UK is £5,689 (or nearly 50,000 kroner, or 6,500 euros), including the cost of depreciation, insurance, fuel and tax. I’m sure the figure would be far higher in Denmark, where all of these factors cost more – especially the well-known 200% motor vehicle sales tax.

If I did a similar calculation for running my bike, which I bought from a supermarket for about 1,500 kroner (180 euros) a few years ago, the figure would be ridiculously small. For a start I don’t have to pay tax or insurance, so that’s a zero figure, it runs on fuel I would otherwise have ‘put in the tank’ anyway (peanut butter and jam sandwiches and pasta, mainly) and its value is so low that I don’t have to worry about depreciation or it getting stolen. What’s more, there are no parking fees, no road tolls and I’d have to be really unlucky to get a ticket. In fact, the only thing I really have to spend money on are repairs, which usually amounts to a few hundred kroner a year to replace tubes, the chain (which gets rusty due to all the salt they put on the roads in winter) and brake blocks.

So even if I assume that I spend 1,000 kroner a year keeping my trusty ‘Stallion Classic’ on the road, it is still over fifty times cheaper than running a car.

And Copenhagen is certainly the best city to ride a bike in. When I lived in London for five years I would cycle through thick traffic every day with nary a bike lane in sight. This culminated in a year where I worked in the West End but lived way out beyond the northern suburbs, making it a 24 mile round trip every day through some of the most ferocious traffic imaginable. My basic premise was that everyone was out to kill me – and London’s lunatic black cab drivers almost succeeded on two occasions.

So when I moved to Copenhagen, with its 350km of dedicated bike lanes, its little traffic lights just for cyclists, its millions of bike parking spaces and a law that’s on your side if you’re on two wheels, I thought I’d pedalled into paradise. I quickly realised that there was no separate bike culture here, bikes were simply part of the culture. That meant no more squeezing into Lycra or buying flashy mountain bikes. Instead it meant getting kitted out with a rusty old clanger with a comfortable seat and just sitting back to enjoy the view. I loved it so much that I even spent a summer working as a bicycle rickshaw driver, although I gave it up when I realised this simply meant transporting drunk (and usually very heavy) Swedish businessmen to the red light district and ‘waiting outside’ for them.

So it came as a bit of a surprise to me to find out that some foreigners moving here didn’t take advantage of this. Indeed, what came as something of a shock was to discover that some people couldn’t actually ride a bike at all and regarded doing so as something for children! How had they been getting around all these years? (I know, I know).

So why do so many people in Denmark cycle?

Well, it’s not to do with wanting to protect the environment, as some people think. The truth is that Denmark, being mostly flatish, has been ideal for cycling ever since bikes became popular in the 19th century. This all began to change with the advent of cheap motoring, and by the 1960s the roads were given over mainly to cars, buses, trams and trucks. But the oil price shocks of the 1970s showed the dangers of becoming over reliant on motorised transport and, while practically every other nation hit the snooze button and rolled over Denmark got to work on building an infrastructure that reduced its reliance on oil. Driving cars was banned on Sundays (for a while) and bike lanes were built across the land. People were housed in highly insulated apartment blocks within cycling distance of urban centres and bike repair shops sprang up on every corner. The resurgence of the bike age had begun.

What did other nations do by comparison? Massive highway projects, tax breaks for motorists, suicidal rezoning plans ensuring that today’s dormitory suburb is tomorrow’s exurban nightmare: the list goes on.

The fact that Denmark realised that oil was running out and actually did something about it sets it apart in this respect from other nations. While the rest of the western world got swept up in the gimmickry of Thatcher/Reaganite politics (whose particular political good fortune was the discovery of large amounts of oil in the North Sea and the Alaskan North Slope) Denmark stuck to the task in hand of preparing for a world without much oil. That’s why almost half of short journeys today are by bike.

So it wasn’t particularly out of an environmental concern (although this was a pleasant side effect) rather than a concern about the prospect of Peak Oil. This is a fascinating subject in itself, and one that I will be devoting much more of my time and writing to in the future, but the key point I want to make here is that in a system that has become overly complex and reliant on finite resources (i.e. oil), the most sensible decision you can make is to limit the complexity and return a rung down the ladder to a more stable and tested technology – the humble bike.

And there lies the genius of Denmark’s sticking to its guns over oil depletion. The price of petrol could rise to 100 kroner a litre tomorrow, but most of us would still be able to get to work. Contrast that with the US, where people commute from far away suburbs driving on motorways in cars that have woefully low fuel efficiency. Things are almost as bad in Britain, where it has been reported that 1 million people gave up driving their cars in 2010 because the cost was becoming too high. It’s almost certain that this figure will rise in 2011 and each successive year as the price of oil marches steadily upwards over the coming years. Who looks silly now?

Einstein would approve of the Danish approach, after all, he said: “Any intelligent fool can make things bigger, more complex, and more violent. It takes a touch of genius – and a lot of courage – to move in the opposite direction.”
Posted by Jason Heppenstall at 8:56 AM