The circle of life

I have just returned from a week in England on family business, which is why I'm a bit late posting this week. For anyone who wants to know how their native country is doing I'd recommend moving somewhere totally foreign and only returning once a year or less – it's a great way to get a snapshot of how things are going and enables you to see in relief some of the things that would be too incremental to otherwise notice.

A couple of posts back I put forth the opinion that the mass of rocks covered in fertile soils in the north Atlantic known as the British Isles might be one of the better places to live in the post industrial future. My post was republished on another website far more popular than this one, inviting all sorts of comments to the effect that I must be nuts to suggest such a thing and that the only safe course of action was to buy a cache of guns and move to South America/Canada/New Zealand (delete as applicable). The implicit assumption was that the stiff upper lip which we Brits supposedly possess will undoubtedly suffer a catastrophic and uncontrolled enflaccidation and the resulting blood-curdling yell we collectively emit as we unleash fifty years of post imperial angst will be audible on the Moon. Indeed, it won't just be yelling; there will be ethnic cleansing, famine and cannibalism as the zombie like hordes consume each other in an apocalyptic bloodbath befitting a 50s B-Movie.

All this seems very strange because this isn't how I envisage things panning out at all. I admit that it isn't all going to be a bed of roses, and whatever nuclear mistakes we make right now to provide cheap electricity at the expense of future generations will make life largely impossible in some areas. What I was merely suggesting was that right now there is a large enough minority with common sense to make an actual difference as things steadily tighten over the coming years. All of the enduring qualities of the everyday British folk are still present. Amongst them I would include modesty, common sense, charity, self-effacement, stoicism and wit. Of course, there are also plenty who display not a single one of these qualities, but there isn't a place on Earth where these people don't exist.

Yet as anyone who has had the unpleasant but potentially life-saving experience of becoming peak energy aware knows, as soon as you start seeing things in certain ways it becomes impossible to unsee them again. That's why, wherever I go, I tend to take make notes of 'good points' and 'bad points' when it comes to our pressing energy and societal predicaments. Here are my somewhat glib and off-the-cuff mental rough notes from my last week spent in one small corner of England:

My daughter and I visited a farm when we were there. It was beautifully situated high up on the South Downs – an ancient landscape and one of the last areas to submit to the tide of Christianity (and holding onto its Wyrd animist religions long past other places in the British Isles). It is lambing season and my six-year-old daughter and I watched as one was born in a lambing shed. There was something remarkable about witnessing the birth of a struggling tiny creature and the quiet dignity of the ewe as she endured the labour. No less impressive was the devotion and care of the young shepherds who confessed that they had had no more than a few hours of undisturbed sleep for the past week.

It was great to visit a working farm and see the pride with which it was held by the farmer and his family. Equally as interesting to me was wandering around the land and unearthing various pieces of farm machinery from the days before efficiency drives rendered them obsolete – but which the farmer was loath to get rid of, possibly because of some nagging fear that they might one day be put into service again. Real farmers don't take anything for granted. I found a hand cranked butter churn, a corn thresher and something called an oil cake breaker (below left) which I have no idea of. 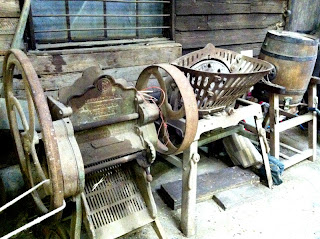 I even found this old telephone box, which I'd probably volunteer to re-erect in a post mobile phone future. 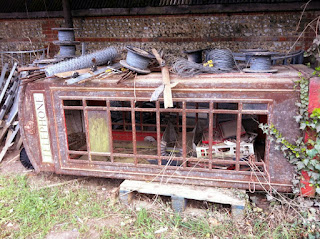 From the vantage point of this family run farm high up on the Downs we were able to see for many miles right down to the English Channel, which glistened silver in the mid-afternoon sun. There we could just make out before the shoreline the spire of Chichester Cathedral, which rose like a tiny spike in the vast rolling landscape which seemed otherwise devoid of all human life.

But visiting a farm wasn't the real reason we were in England. Down below I knew, near the cathedral in the dull blur of grey which represented the furniture of humanity, my father lay in a hospital bed, having by now entered the last stage of his life. I had visited him some hours before with my sister and we had given him a photographic book of 1950s American cars. In his prime, at more or less the age I am now, he had lived in Canada and the US and owned at different times several Buicks and Plymouths and other huge gas-chugging automobiles fitted out with leather interiors, white wall tyres and chrome trimmings. Now, enfeebled and fogged by dementia and the drugs that the doctors keep pumping into him in an effort to prolong his life, it was all he could do to run his finger over the pictures and mutter unintelligibly, enchanted for an instant by the memories of all those years ago. His eyes became misty as he gazed at those defunct cars, driven by smart-looking carefree young men with neat hairdos and neat girls in the passenger seats. He was once one of those young men with my mother, herself long since gone, riding beside him.

We looked at the book together for some minutes, him holding it in his trembling hands, and the nurse sat nearby in case of any incident, making cheery noises about his progress and coming up with practical suggestions for how we could enliven his mind. But soon it was time to go and my father shuffled off clutching a trolley handle and supported by the nurse on one side. He said goodbye to me, but I'm not certain he knew who I was.

Now, as I looked at the verdant landscape around me, the newborn lambs and duckling and chicks, and indeed at my own young daughter, it seemed imperative not to be weighed down with heavy thoughts of decay and doom – thoughts that are so prevalent today. Life is a continuous circle, a never ending loop. We are born, we live, we fade and then we die. It is as inevitable as the rising and setting of the sun, but it doesn't stop life being worth living. Yes, we may be at the end of the industrial age, but life will go on. Those shiny cars that my father experienced the good fortune to enjoy for a while won't be coming back, and indeed the memory of the things we take for granted today will fade until they too will be nothing but causes for reminiscing by old-timers. And then even the memories will be extinguished like a waning and flickering candle in the night, only to be replaced by new things that people value - who knows, they might even be less destructive things. We can only hope.

It's not an ending. It's just a new beginning that we can but barely imagine.

Posted by Jason Heppenstall at 10:38 PM