Our Vacation from Reality 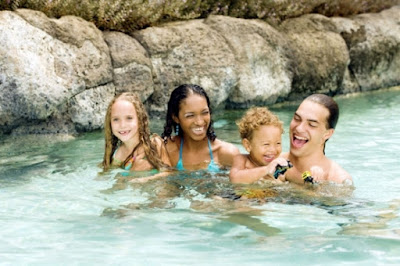 This last week a personal stroke of good fortune led me to book our first proper family holiday in five years. Yes, we finally seem to have sold the 'unsellable' farmhouse in Spain and I had promised the family that, should this ever occur, we would all go on a holiday somewhere.

Of couse, me being me, I couldn't let that just be an excuse to lie on a beach for a couple of weeks – that would just be cheating – so instead this summer we'll be staying on an organic farm on a Greek island and will help protect the eggs of endangered loggerhead turtles on a nearby beach. The farm is run by 'returnees' – who had previously had good jobs in offices, probably in Athens, before TSHTF, so it will at least be interesting to talk to them and get a little first hand reportage from Greece (two days in Athens at the start should allow for that).

I'm not sure if people who have knowledge of peak oil should be allowed to go on aeroplanes, and in my defence, I hardly ever do. My normal mode of transport is a bicycle or the feet that four billion years of evolution have given me. But still, please don't expect a grovelling apology as I fully intend to continue using some fossil fuels on the Long Descent, whilst at the same time using my time and energy learning and preparing to live with a lot less of them.

'You're going where?' asked a relative in horror when informed of said holiday. The implication being, of course, that Greece is some kind of warzone and that we'll likley be taken prisoner and sold into slavery for hard currency. I doubt that will happen, but if it does you can be sure that I'll be blogging about it.

Anyway, on a related note, I was flicking through an old copy of the literary magazine Granta the other day and I came across a series of pictures of the Kent hop pickers of yesteryear. Until about the 1950s it was common for thousands of people from the poorer districts of London to go on a family holiday every summer in the hop fields of Kent, south of the capital. Most of them walked there, spending up to two months at a time working quite hard every day beneath the summer sun. Kids joined in too and, for the men, it was a chance to escape the grim and dangerous conditions on the docks or in the factories where they worked.

The practice persisted for many years, and in many counties a similar thing still exists (the most notable example I can think of is the great walnut forests of Kazakhstan which fill with families every summer and which the late Roger Deakin wrote about so wonderfully in his book Wildwood:a Journey through Trees) but was killed off by the arrival of the welfare state which negated the need for those on low incomes to earn extra money to pay their rents. Of course, it wasn't all work. There was a great knees-up most evenings (they were, of course, involved in the production of beer) and the opportunity to live in the open countryside for a few weeks of each year with a bunch of friends and relatives must have been highly anticipated.

I remember my own grandparents telling me about their family holidays. They set off from Manchester, en famille, on bicycles, arriving at the coast some days later. This was considered normal back then when the aeroplane's main purpose was to drop bombs on your enemy and the only people who took to the skies in them often didn't come back again.

I know quite a lot about my ancestors from the last few centuries because my sister is a genealogist and has traced them quite far back (although not all the way to the Viking settlers who named a Yorkshire village Hybden's Dale (which meant Rosehip Valley in Old Norse, as it still does in modern Danish) which was later anglicised to Heptonstall, and then misspelled Heppenstall). I know, for instance, that most of them lived in and around Sheffield and one of the most common professions, if you could call it that, was 'stone picker'. These people went around literally picking up stones from fields and transported them to wherever railway lines were being built where they would be used as bedding for the tracks. It's a bit of stretch to say that my family built the world's first railway system, but we certainly did our bit.

This gave me pause for thought about how things have changed – and the likely direction they will take again in the future if and when cheap fossil fuel powered transportation reverts to its default position of unobtainable. Will my great-grandchildren one starry night in the future be sitting around a camp fire in a Scottish vineyard and telling stories about how their ancestors once flew around the world in giant ships with wings?

When this thought seized me I couldn't resist the idea of making a little photo series at the top of this blog post showing a past family holiday (the hop pickers), a current family holiday (a consumer class family in a concrete resort staffed by resentful underpaid locals on a tropical island) and then a future one ... But try as I might I couldn't find an image for the last one as all available images relating to families of the future have us decked out in skin tight costumes and hopping onto spaceships for a few days on Mars.

So I'm afraid we'll just have to imagine how a family holiday will look like – if such a thing exists – 50 years from now when we all tumble chaotically down the rough side of Hubbert's Peak.

Here's a thought for the week that fits in with my Greek holiday theme but which I couldn't be bothered to insert into the prose in a convincing manner: Like Icarus, we are certainly flying too close to the sun and the wax holding the feathers in place is melting quickly, if only we had the eyes to see it.

In the same edition of Granta I read a story by Doris Lessing entitled Death of a Chair. This tells the tale of an old chair bought at auction for pennies in the 1960s and its eventual destruction by Lessing with a saw some 40 years later. It's as poignant a story as you're likely to find about the loss of craftmanship over the years and its replacement with cheap mass-produced junk. Only at the end, when she strips back the layers of fabric and the saw bites into the wooden frame does she realise what an act of vandalism she is involved in, although by that point the chair has been ruined.

When I'd finished reading it I quickly showed it to my wife, in the hope thet she would become inspired to return to what she is trained to do. She is a qualified old-style upholsterer who can take an ancient smashed up sofa, strip it down to the frame and build it up again into a top quality restored piece of furniture that should be good for another century of use.

She learned these skills in England, completing a City and Guilds course in upholstery and furniture restoration, despite being the youngest in the class by forty years or so. Since she finished it ten years ago she has been told repeatedly that there is 'no use' for her skills and she eventually conceded that 99% of people would rather shop in Ikea than pay for craftmaship. So now we have a huge amount of tools and materials in storage – everything from wooden trestles and different kinds of tack hammers, to huge bags of horse hair, webbing and resuscitated fabric – just waiting for the day when the logic will turn and people will once again want to pay a flesh and blood person a reasonable sum to do a decent job. In the meantime she is working as a cleaner for the local council, cleaning up after old people in care homes and listening to their stories of how things have changed over the years.

I'm not sure how long we will be waiting ...
Posted by Jason Heppenstall at 11:12 AM