It’s an interesting experience living in a country as it slowly but surely wakes up to the fact that it is not immune from the economic storm clouds that are building. Here in Denmark politicians have finally realized that the country cannot support such a cumbersome public sector in such straitened times, and that something’s gotta give.

For anyone unfamiliar with the Scandinavian model of ordering society, it can basically be summarized thus: high taxes, high benefits, high standard of living. I’ve written about it extensively in my old blog (which I may provide some archive files of, if anyone’s interested) – so much so that it makes me exhausted even contemplating it. It’s the kind of society that makes liberals swoon with envy and free market conservatives boil with righteous anger.

I used to get my daily dose of right-wing trollery from – sorry to say it – resident Americans who had fallen into the Danish honey trap but were now living out their tortured ‘prison sentence’ existences in this socialist utopia. How dare they have a well-ordered society where nobody is stinking rich and nobody is poor? It flies in the face of all logical reason!! It’s communism, I tell you!!

At the other end of the scale are the dreamy liberals who came to this land of social mobility, sexual equality, eco consciousness and tasteful shabby chic design, convinced that they have entered the Holy Land – and their faith is similarly unshakeable.

In the middle, of course, are the Danes. For them, this is just normality.

But now, it turns out, that normality which once seemed so unshakeable is increasingly unaffordable. It’s a basic tenet of politics in Denmark that socialism rules the roost. Even the Conservative Party would be considered pinko commies by American standards – and the far-right Danish People’s Party could be aptly described as, ahem, national socialists – although they don’t appreciate the nomenclature.

Thus an unholy row has broken out about something called dagpenge. Now dagpenge (pronounce dow-peng) means literally ‘day money’ – that’s unemployment benefit to me and you. If you lose your job, or quit it, you are liberally showered in the stuff. I did just that two years ago and was entitled to about $2,000 a month – and practically all I had to do to earn it was click a button on a website once a month to say ‘I want some more please’. This was great and I could have carried on for five years, if I had wanted.

Problems have arisen, however, because it turns out that when too many people click that button, the few people left in full time employment have trouble paying for it. It’s pretty obvious stuff, really, but it could only work in the same manner as a Ponzi scheme in an ever expanding economy. Thus the (socialist) government has now declared that the maximum length of time you will be allowed to claim this money is two years. In reality this means that a large hole has suddenly appeared in the safety net that a country used to womb to tomb entitlement could never have dreamed of until recently.

As a result political scalps aplenty are being eviscerated. Most of the main parties (and, oh, there are many parties here) realise that such a bloated system of welfare cannot continue in its present form, but just can’t bring themselves to do anything about it. The left wingers and communists, however, want the period to be extended and for things to carry on as normal, printing money if need be. It’s a very familiarly depressing scenario and there’s nary a news bulletin without some mention of it.

But the country’s underlying economic woes have serious structural problems. We can also add into the cauldron of troubles the fact that many of the country’s biggest employers are packing up and moving overseas where employees come cheaper and there aren’t so many regulations. This is further inflating the jobless figures (which, by the way, are semi fantasy because they don’t include all of those who are put on educational schemes or the ‘before time’ pensioners, some of whom are in their 20s) and reducing the tax base like a snake eating its tail.

As if that were not embarrassing enough, unfortunate Denmark is surrounded by economic over-achievers! To the south is smoke-belching Germany, where Chinese millionaires are standing in line to buy luxury cars, and to the north are Sweden, with its huge natural resources, and Norway, ditto but with lots of oil as well.

Okay, so Denmark has some large factory fur farms, is big on biotechnology, pig ‘production’ and Lego – but it remains to be seen which of these industries can stay the course as they all rely on low oil prices, a stable trading environment and generous government subsidies.

Oh, and it also has Vestas – the wind power company – but even that has lost 95% of their value since 2008. That just leaves Bang & Olufsen, Carlsberg, Maersk, Lurpak, Aragorn and The Barbie Song.

Anyway, given the guaranteed fact of our low energy future in which most of those energy slaves we enjoy the services of today will die off, I thought I would simultaneously do my bit for the environment, secure my transport future and provide a tiny boost to one small area of Denmark’s manufacturing industry in one fell swoop. Yes, I bought myself a cargo bike.

I have been considering buying one for quite a while. They are very common on the streets of Copenhagen, and are used to carry everything from children and shopping, to pets and, er, expanded polystyrene. 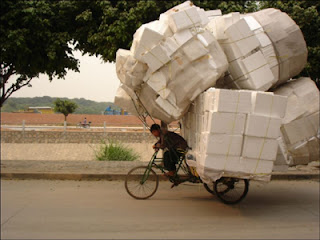 But with so many models available now I was having trouble figuring out which one to go for. Ignoring the cheap-looking Chinese made ones that have appeared of late (look closely at the welding and components and you’d want to ignore them too), I narrowed it down to the most popular four different brands I regularly see around me. These were as follows:

Christiania Bikes. This is the original three wheeler cargo bike. Constructed with a sturdy frame in a workshop within the sprawling commune of Christiania in Copenhagen, these are the original road warriors and have been trundling the bike lanes of the city for around 40 years. They are no-nonsense affairs, with internal gears (which is the standard on Danish bikes – meaning you have to exert backwards pressure on the pedals backwards to brake, and you don’t get the gears gunged up with crud)  and come in any colour as long as it is black. Actually, that’s not quite true any more, and you can get them in various pastel colours, if you are that way inclined. They can carry loads of up to 100kg.

Sorte Jernhest. This means Black Iron Horse in Danish, and is a cargo bike that means business. Like the Christiania Bike, it is solid and looks like it is built to last. It’s a bit more stylish than the former, with a nice looking horizontal tube frame and an industrial looking finish on the front metal box. I have never actually tried one of these out but I was tempted to go it for this because of its mix of durability and cool name. Just like the others on the market, they are not cheap, but they cost practically nothing to run and are unlikely to seriously break down in the short or medium term.

Nihola Bike. This is ostensibly another copy of the Christiania Bike and is manufactured in a workshop in Copenhagen. In my journalist days I went down and met the owner and he lent a few of the bikes to the newspaper for delivery purposes during the COP15 climate conference.  The design is modern and the gears work well, but to my mind the ride felt a bit ‘tinny’ and it felt like I was going to fall off when I went around a corner. Still, nice design and quite practical. I’d say they would be fine for city use and light loads, but they are not really designed for heavy, dirty work.

Bullitt Bike. This was the last of the cargo bikes I considered. Unlike the other three this is a low-slung , long-based two-wheeler, and the cargo section is in the middle. Like the name says, these go like a bullet, and are by far the fastest of the lot. What’s more, the gearing is set up with speed in mind. They come in a variety of colours and models and are seriously slick. I was very tempted by the Bullitt, but what put me off in the end was the price tag, combined with the fact that a bike this flashy is bound to get stolen.

So, in the end I went with my gut feeling and opted for the solid traditional hippiemobile – the Christiania Bike. The reasons for this are manifest. I shall list them as bullet points:

And so I found myself down in Christiania a couple of weeks ago hopping over puddles and sniffing the tang of marijuana on the crisp October air as I searched the flowery back streets for the Christiania Bike workshop. I entered a large brick building where overalled women were busy twisting lengths of metal and scrap objects and turning them into works of art to go on sale. I asked one lady where the bike workshop was and she pointed me to a glass door at the back and told me to just go on through. Once I’d found my way in, Jens, the manager, showed me to my new steed, which was stacked up with a consignment of others (see below).

There was a bit of paperwork to go through (like paying for it) and I asked Jens how business was. He said it was pretty brisk, all things considered, and they were flat out busy with new orders (the bikes used to be made here but nowadays they are made ‘offshore’, meaning on the quaint Danish island of Bornholm, and then shipped to the mainland for assembly in Christiania). It was good to hear that they are still doing well despite all of the competition out there nowadays – five years ago these were practically the only cargo bikes you ever saw.

As I rode out of Christiania and joined the rush hour commuter traffic (mostly other bikes) on one of the main arteries of the city I felt like I was riding on a wave of euphoria. The steering took a bit of getting used to, and I learned that you have to lean back a little as you turn to avoid overbalancing the bike and falling off. But apart from that it felt fine to ride, and very light. Having ridden (driven?) much larger bikes during one summer spent as a rickshaw driver in Copenhagen, I was used to being a bike lane hog, although the Christiania Bike is narrow enough to allow others to pass, so this isn't a problem.

Okay, so it’s just a black bike with a box on the front – but no, it’s a bit more than that – it’s a pretty low-risk security for the future. Just think: no fossil fuels to power it, no insurance, no parking fees, hardly any maintenance costs and no tax. And just riding it keeps you fit and your leg muscles bulging.

Okay, transport: tick. Done that, now onto the next thing …

Posted by Jason Heppenstall at 9:00 AM