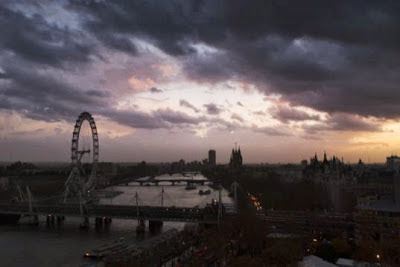 “Does Andy Murray winning Wimbledon mean that we are headed for the economic good times again?” asked pretty much every news outlet in Britain yesterday. We were even treated to an ebullient Jon Snow on Channel 4 News prancing around on London’s Primrose Hill in the summer evening sun asking bemused onlookers whether their consumer confidence had improved over the last 48 hours (to their credit they all looked baffled by the question, perhaps suggesting that those who live in the media-land bubble should get out more).

But the headlines keep coming thick and fast. Here in Britain we are told that a house price boom is on the way. But if that’s the case then who’s buying? It certainly isn’t the kind of people for which owning a house would be rather useful, say, young people starting up a family. Instead, demand seems to be driven by the increasingly ubiquitous buy-to-let landlords, keen to make a killing out of a desperate situation. Some of these ‘ordinary people’ have amassed hundreds - even thousands - of properties, which they let out to those unable to afford their own. One recently boasted that he ‘earned’ £35,000 a week, meaning he could go on and buy a few hundred more properties and become even wealthier.

Presumably some algorithm somewhere has decided that I might be a good BTL landlord as I keep receiving emails from companies wanting to make me rich. But given that so many people are now being forced into usually sub-standard accommodation, presided over by a rentier class indifferent to their plight I find myself wondering when the day will come when landlord killing becomes a fashionable sport again. Britain might be running out of money, but there are still plenty of lampposts and miles of rope.

Although, whenever I express sentiments like the one above I am inevitably accused of being gloomy, or depressive or, worst of all, boring. I have to say, it’s hardly a barrel of laughs pointing out repeatedly the emperor’s lack of clothing, and sometimes I’m tempted to just stop typing this stuff and get with the programme. You know, perhaps economics can be sentiment based - perhaps scientists will come up with that wonder fuel after all, and maybe those climate scientists who say it’s one minute to midnight really are just after a new research grant. Comforting thoughts indeed.

But then the fundamentals come screaming back at you and you can’t tie your tongue. Schadenfreude is a horrible word, and not just because it’s difficult to say (or spell). What makes it even worse is the fact that you can raise your voice as loud as you can, and even when you are proved repeatedly right, most people won’t accept the truth of what’s in front of their noses. That seemingly apparent truth is that the age of limits is upon us, not that you’d know it from the media and all the assorted ‘experts’ who are wheeled out of their ivory cubicles to pontificate on topics concerning the future.

We are apparently in an economic recovery. The US jobs market is booming, and Chinese people now all own at least one BMW.

Never mind the ‘fundamentals’, such as the velocity and supply of money - that is money in the ‘real’ economy away from QE. Here’s a chart put up by The Automatic Earth: 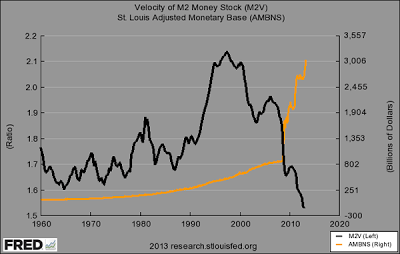 In this case it is looking at the US and that supposed ‘boom’ that they are having over there. Yes, there’s a boom going on alright as the chart shows - a boom in government credit creation that is being transferred more or less directly into the coffers of the biggest investment banks for them to sit on and do nothing with. This is money that current and future generations of Americans now owe the government. And the velocity of money - that is, the speed at which it travels around the economy from one hand to the next - is also experiencing a massive boom - if you turn the chart upside down.

But, hey, back in Britain again we will all soon be sitting in driverless cars designed by Google (never mind that the government is running out of money to fix the potholes in the roads). And the next big boom area is the fusion of biotech and robotics where ‘the line between human and robot will become blurred’. And by genetically engineering crops and handing over their ‘patents’ to corporations we ‘will cure world hunger’. Obama has vowed to ‘light up Africa’s darkness’ by electrifying the continent. Ten billion people on planet Earth is 'not a problem'.

I don’t know about you but this maelstrom of voices is starting to make me dizzy. Perhaps I should just tune off and live in a cave, as an increasing number of people seem to be doing.

But what is really confounding is the sheer amount of misinformation out there that somehow possesses the almost magical ability to coalesce into ‘fact’. Perhaps it’s just a result of our over-complex society and will go away in due course. Thus, we are told that fracking gas in Britain will give us enough energy for 100 years. Fact. No argument. No dissent permitted.

Mention the very real limits which make this pipe dream unachievable and you are inevitably accused of being overly negative. But I can now see quite clearly how events are shaping up in Britain and how we will go down screaming and battling one another as the dead weight of entropy pulls us beneath the waves. The problem is, we are literally running out of the kind of energy flows we need to make a modern industrial economy tick over. North Sea oil and gas is dropping like a rock, wind and solar are frankly useless for anything other than small scale applications, nuclear is a giant sickly radioactive white elephant that is running out of current buns, and any other energy source that you care to think of is so riddled with problems that it beggars belief that people buy into it.

But, hey, seaweed will save the world, according to the Guardian.

But as the needle on Britain’s fuel gauge hovers ever closer to the orange area I wonder what the reaction from the population at large will be when the lights literally do go out - as we were warned would happen by 2015 by no less than the energy regulator Ofgem a couple of weeks ago. Will people say ‘Oh well, it was nice having fossil powered energy while it lasted but now I’ll just trade in my Ford Fiesta for a donkey, get a job as a day labourer on a farm and tell the kids that they’ll have an even harder time of it than me.” Or will they scream blue murder at the politicians and energy companies, march en masse through the streets and elect a wide-eyed militant loony who promises to ‘restore Britain’s glory’?

Predictably, the news about the increased risk of blackouts in 2015 was met with a barrage of denial by politicians and industrialists. “The lights will not be going out,” was the peeved response. There was a subtext to that response, of course, and the subtext was ‘Unless we let them go out by not fracking the life out of the country, letting the French and Chinese build a new generation of nuclear power station and opening up some of the coal mines that Maggie shut down because they were so hard to get the coal out of. Indeed all we have to do is try harder to keep the lights on - if we all join hands, scrunch up our eyes and shout at the top of our voices:

That should do the trick.

Posted by Jason Heppenstall at 12:04 PM