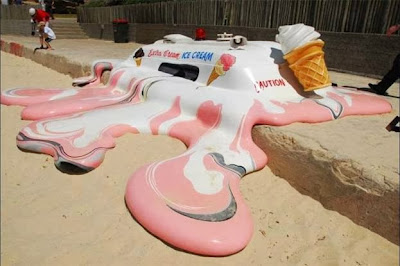 This morning I awoke to the sound of a strange noise coming in through the open windows of the house. To my half-asleep ears it was a whooshing, rustling sound, as if thousands of people were stood around outside the house all screwing up balls of paper with their hands. A clap of thunder brought me to my senses and I leaped out of bed to close the windows, which have been permanently open for the last couple of weeks, just as the sheets of monsoon-like rain began to torrent down from a cotton wool sky.

Yes, Britain is experiencing something of a heatwave at present and has just had the hottest July weekend in years, and this sudden welcome gush of rain looks set to provide only a momentary respite. It only fell for about ten minutes, but it was long enough to wash the dust off the cars and give the local foliage a much-needed drink. However forecasters say that next week temperatures will be even hotter. So far they have touched the low 30s (around 90F), which is more than hot enough for most people here who are more used to damp and soggy weather.

If temperatures do rise to 35C (95F) next week, as is predicted, we can expect to hear many more warnings from the government about the dangers of extreme heat. Already, it is estimated, at least 760 people have died who would still be alive were it not for the heat. Yes, most of them were elderly or in poor health, and were unable to find somewhere to cool off (air conditioning is almost unheard of in Britain). Internet boards are full of scoffing Australians and Texans, saying that 30 odd degrees of heat is practically chilly to them - but then weather is all about what people are acclimatised to (I've seen people from hot countries practically die in Scandinavian winters in which I could get away with wearing a thin sweater). It’d be gallows humour to point out that some of the only remaining cold rooms to be found in the UK are within municipal morgues at present.

Particularly at risk are people who live in high rise tower blocks, which trap heat during the long days. This heat rises and builds on the upper floors, and the nights are too short to allow much of it to escape before the merciless sun is up yet again. It’s just one example of infrastructure that isn’t fit for purpose and was never designed to cope with conditions outside a narrow range of possibilities. Similarly, there are reports of melting roads in Cambridge, outbreaks of grass fires across London and low water pressure caused by people wasting it by keeping their lawn sprinklers on all night.

I am just old enough to remember the summer of 1976, which was the last really hot summer this country experienced. Below is a picture of the five-year-old me (dressed as a wizard) in the Banbury carnival. Minutes after this picture was taken I fainted in the heat and had to be carried away by paramedics (note to self: don’t wear a black wizard gown and hat in suffocating heat). Around the country at that time people were finding their water supplies cut off and lines developed at rapidly erected standpipes on street corners. It was hot alright. 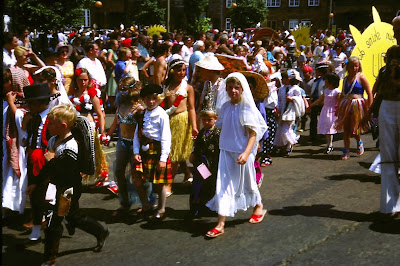 So although extreme weather events are nothing new it is the increased frequency of their occurrences that is the obvious effect of global weirding we are now starting to experience. We’ve just been through the coldest spring in living memory, which followed hot on the heels of the wettest summer. A friend in southern France reports that a month ago it was only 10C there, when it should be more like 30C. Germany has just recovered from mass flooding, the Arctic ice is melting at record rates - one can go on and on about the weird climatic conditions that are now prevailing across the globe.

So what are we, in Britain at least, doing about this very obvious climate change? Here, unlike in the US, people at least say they take anthropogenic global warming seriously. Despite repeated attacks by various well-funded lobby groups through such organs as the Daily Telegraph, most people believe we are in deep trouble, albeit trouble that is far off enough not to have to worry about just yet.

But the government doesn’t seem concerned in the least. Not only are there efforts to stop climate change being taught in schools, but the chancellor just announced that fracking companies will face the historically lowest taxes on record for any fossil energy producer. This, we are told, is to kickstart the revolution in shale gas fracking - a revolution that IMO if it goes ahead is likely to lead to the closest we have come to all-out civil war in this country since the 17th century.

The reasoning behind this is simple enough; to drill enough well heads to produce even a modest flow of gas we would have to drill literally thousands of wells in the northwest alone. This would be in people’s back yards, on farming land and in areas that are naturally beautiful. The only feasible way that this could ever happen is if the government takes control of land and property on a grand scale, and it would need a very large security force to do that. In the process groundwater would be polluted by the fracking chemicals and much of the remaining North Sea energy would be wasted in trying to make this very low EROEI energy look attractive. It's a recipe for disaster, but it's also a price that many people seem willing to pay given the drum-beat of hype that is pouring forth from politicians and the media.

The only real hope in this scenario is that the American fracking sham comes visibly apart at the seams within the next couple of years. The resulting shock will strangle the UK’s nascent fracking industry at birth before it gets a chance to irreparably pollute the aquifers and cause much bloodshed. It’s a race against time.

And let’s not forget that the UK is running out of water. The intensely wasteful use of water in agriculture is estimated to only have a few years left in it and 'peak water' is on the cards. Future warming, such as we are experiencing right now, is putting a huge strain on water resources and scientists reckon that we are only a few years off putting ourselves into a permanent drought situation that will see crops shrivelling in the fields beneath a super hot sun.

Of course, there are many ways to conserve water - the most obvious of which is to grow crops biodynamically and restore as much moisture retaining topsoil as possible, but I haven’t heard anyone in a position of importance talking about these measures. Indeed, this kind of overshoot is a blind spot for the growthaholics, and shouldn’t be allowed to interfere with business as usual. The solution - as ever - is to import more ‘stuff’ (food, water, oil) from the global marketplace, wherever that is, and that technological solutions will be found for the most pressing of problems. The assumption here is that the UK will continue to remain a wealthy country far into the future and that foreign markets will be able to provide all of the commodities and energy we desire - all at a favourable price - and that technology is the goose that keeps on laying the golden eggs whenever we need it to.

Alas, this kind of non-thinking is delusional and dangerous. We are being promised a future that we can’t afford and only a very small fraction of people realise the severity of the creeping problems which are now beginning to consume us. There is no way out of our predicament while this kind of blindness persists. We are fated to collide with overshoot like a car hitting a brick wall, and all we seem to be able to do is push our foot down further on the accelerator and scream ‘yee ha’ as we do it. It’s not a pleasant thought, but then 22 Billion Energy Slaves trades in unpleasant truths rather that comforting fantasies. If we want to get a taste of how the UK will be in 20 years then have a good look at Egypt.

The heat is on!

Posted by Jason Heppenstall at 11:21 PM