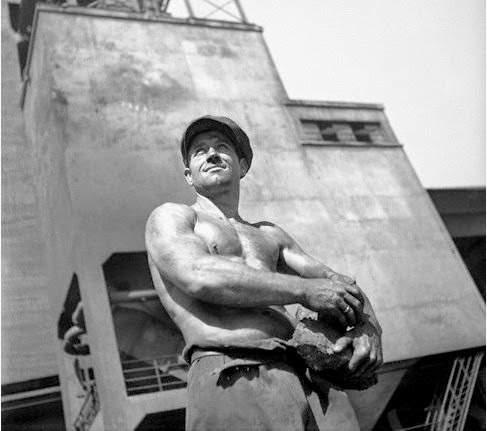 Daemon: benevolent or benign nature spirits, beings of the same nature as both mortals and gods, similar to ghosts,chthonic heroes, spirit guides.

Greetings folks! I'm still here but haven't written anything in a while or been doing much in the way of online connecting generally. In fact I've been busy doing other things, mainly digging.

My days at the moment tend to involve digging out about half a ton of soil from the basement of our house, carrying it by bucket to a trailer and then driving it to our woodland where I unload it to build up various earthworks on the land, including a terrace for a polytunnel, a retaining wall for a large pond and another terrace. I then spend a couple of hours hacking up clay and rocks with a pick axe to deepen said pond and then return home to pick children up from school, make dinner and make sure they do their homework.

Usually, by the time they are in bed, I'm too shattered to do anything other than read.

I lost my part-time Danish translation job a couple of months back, which was what was keeping us afloat financially. As a direct result of this I found myself considering the unwelcome prospect of having to rejoin the so-called 'real world' and applying for a job at a newspaper. After much rationalisation I decided to go for it. On the day of the interview, which was for a chief reporter position, I found myself unable to don the required suit. I haven't worn my suit for many a year (it only sees light at funerals) and so instead I wore a casual shirt and jeans. It felt more comfortable. At the interview, which took place in a fairly large office in Truro, I found myself putting on the old act and talking in the acronyms and codewords that must necessarily accompany any discussion of journalism/marketing in the internet age (PPC campaigns, click-through ratios, Adwords etc), how to make stories 'viral' and how to drive traffic to sites via 'social media marketing'. As I waffled on I saw my daemon rise above me and stand there with his arms crossed, shaking his head slowly in disapproval at the sad spectacle before him. When I got home I felt sick.

Later that day the editor called to say that I didn't get the job. Something about me not having the requisite legal training meaning I would be a liability to the business if they employed me (I had pleaded that 'common sense' had always worked in the past, but these days it is not a valid excuse). When I'd finished whooping for joy I came to the sober realisation that this was the real thing: I was unemployable. I had applied for a number of menial jobs too, but was turned down for being 'too educated'. So this was it: make or break with my wits alone.

And that's why I've decided to go 'all in' with being a mushroom-growing, wood coppicing, herb-producing, permaculture-practicing, charcoal-burning woodlander.

Luckily for us my wife had managed to get a job as a community care worker at about the same time as I lost my job. It's one of those touted new jobs where you have no rights and get screwed at every level (she has worked 19 hours out of the last 24 for minimum wage and she has to pay the company money if she quits within the first year).

So what it all means is that I'm now the house-husband/manual labourer and that I've given myself a couple of years working flat-out at the woodland to try and make a business of it. I do get some government support, so it's quite an easy deal really, and we still manage to live lives on the level of, say, a lesser Egyptian pharaoh—on about a third of the average national wage for the UK. We also have a lot of fruit and veg growing, so food is nutritious and fresh from the back yard.

So please forgive the silence for a while. I have had a number of writing ideas gestating in my mind as I've been working. I was lucky enough to bag John Michael Greer to myself for an evening when he was over visiting the UK last month and discussed a few ideas over pints of bitter in a Glastonbury beer garden. So, I have a number of science fiction stories ready for writing this winter, with the first 'taster' one being published in 'Beyond Oil 3' (which you can read a draught of here). Before then I'll be aiming to finish my 'peak oil' book which has been on the back burner for a while.

This last one is going to include a lot of stuff that I have been reading recently in terms of Gaian thinking and perceptions. It's what my daemon says I should be doing with my time instead of playing at being a hack-drone in a corporate war zone.

So, that's it for now. The weather is hot and sultry here and they say it will hail golf balls tomorrow. Happy days.

p.s. I apologise for not responding to comments on my last post.

p.p.s. That's not me in the picture at the top.

Posted by Jason Heppenstall at 6:41 PM