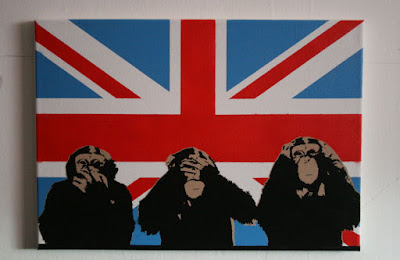 I was having a cup of tea with a friend in his polytunnel the other day and he was telling me about how hard it was to live a simple life minding his own business. He's about ten years younger than me, is married and has a kid on the way, and they live on a three acre plot of land which they bought with their own money and manage using permaculture. They work every day of the week, have practically no money and their ecological footprint is probably so small it might even not register, and yet they are suffering from endless harassment to get them evicted and complaints from nearby wealthy residents who feel that people shouldn't be allowed to live as they please. My friend had a simple explanation for all this, he said that as a nation and a culture, we are basically nasty and intolerant.

This got me thinking. Britain, after all, was the first industrialised nation. We had the enclosures acts from the 17th century onwards which kicked people off the land and turned it over to the pseudo industrial practice of sheep farming (the rearing of 'woolly maggots' as George Monbiot describes them). Wealth has been concentrated at the top for so long and the society has been stratified by class that imagining normal people living and working in the countryside is practically impossible for most.

Our culture is a dominator one. Due to a geological accident regarding coal, combined with a military nature and a lust for foreign goods, we ended up being the world's largest empire. When colonisers arrived in Australia and encountered Aboriginal people, instead of making friends with them they buried their children up to their necks in the sand and played a game where you had to kick off their heads with a single powerful kick. In India we caused mass famines and when people complained we machine-gunned them down. We did the same in plenty of other countries too. We divided up vast expanses of Africa, Asia and the Middle East and drew lines on maps which caused huge upheavals and sectarian violence. Nelson razed Copenhagen with naval bombardment, just for fun, and we devised the world's first concentration camps during the Boer War, and enthusiastically firebombed cities during the Second World War. And then, even when we stopped being an empire, we spawned Margaret Thatcher whose enthusiasm for the ideas of neoliberalism was enthusiastically passed onto Ronald Reagan and forced upon the world.

People don't like to talk about any of these aspects of Britishness. They prefer to talk about the engineering marvels we brought to India and how we taught the world to speak English. We brought football, cricket and tennis to the natives, and helped them become civilised. They might concede that there was the odd 'dark chapter' but that overall the empire building was all good and proper.

I was in London a couple of weeks ago and took the opportunity to visit the City (i.e. the financial district) to do a bit of background research for my online book Seat of Mars. Leaving Liverpool Street station one passes by a bronze statue of some refugee children. I looked at the inscription and it was a dedication to the selfless efforts of local people who took in 10,000 Jewish children from Germany prior to the Second World War. Valiant stuff, but this is the statue that many of the 35,000 City workers walk past every morning as they head for their high rises to unleash further financial mayhem on the world. How many millions of people has the City of London killed in the last few decades? It's a valid question, but don't hold your breath for an answer. Yet these City workers, for the most part, see themselves as good people. They run marathons to raise funds for cancer research, they donate money on Children in Need night, and they buy kittens for their kids. I have some friends who are City bankers and they are not evil people (though we don't have much to talk about these days). Hell, I was once almost a banker myself, luckily fluffing my interview at Citi. 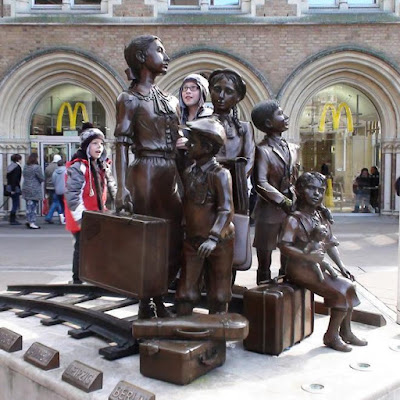 So maybe it's just the system that is evil.

But then I see evil everywhere. I see the attack dogs set onto Jeremy Corby for daring to suggest scrapping nuclear weapons. I see evil in the pages of the Daily Mail and the Telegraph as they attempt to character assassinate anyone who wants to stop global warming, or as they incite violence against refugees. I see evil in the countryside where farmers and rich people collude to kill the wildlife in the most painful and inhumane ways possible. Fracking is evil. Bombing by drones is evil. Hosting arms fairs is evil.


Of course, if you say these things to people they will call you a traitor and a 'Brit hater'. They will point out that it's not their fault, all those wars of conquest, and that they have no need to feel guilty - even though our way of life is funded by one-sided trade deals, easy access to energy and a ponzi system of finance that allows us to continue to rack up astronomical levels of debt and consume huge bites of the world's resource pie. I'm not a Brit-hater - there are far too many positive aspects of life in these isles - but that doesn't mean I have to be an apologist for the less-than-wholesome aspects.

Perhaps my friend had a point.

Or perhaps not. Perhaps it is a case that those in the top positions are psychopaths, willing to do anything and everything to consolidate their power and enslave the masses using mind control techniques. I know plenty of people who are not evil. As a matter of fact, I don't think I know anyone who is evil. Most people, it seems to me, are good at heart. They want to help. They want to love one another. They want to stop the destruction of the world. These are the people it is best to hang around with - they're better for for soul and your sanity.

So why do we collectively put up with all this evilness? Is it because badness has a natural advantage over goodness? Do evil plans always work out in the 'real' world and good ones are just 'idealistic dreaming'? Does the devil have all the best tunes?

I have a theory. Could it be that it is because Britain is an island that was once fabled for its gold and tin mines? That it has been invaded again and again since the end of the last ice age, and that the settler populations always selected for the most war-like? For me, you could forgive the Anglo Saxons and the Romans, but it was the Normans that did it. With their Scandinavian blood, their aristocratic French ways and their lust for conquering - the country changed dramatically after 1066. One of the first things they did was catalogue all the people, land and assets in the Domesday Book. Invasion, murder and cataloguing - the start of the dominator culture. It's been almost 1,000 years and still the top landowners in this country can trace their lineages back to the Normans. Or maybe there is some kind of supernatural explanation ...

So, no, I don't think we are evil. Just some of us. The ones with the power. And the ability to project that power has been multiplied a thousand-fold since we discovered that you could burn coal and use it to power engines. So will we see a future where access to limited high-concentration energy also leads to a corresponding drop in the ability of bad men (yes, it's mostly men) to do bad things? One can only hope so.

Who knows, maybe in 500 years time it will be possible to live on a small piece of land and raise a family without having the collective wrath of a millennium of dominator culture threatening to fall down and crush you just for wanting not to be a part of that system.


Posted by Jason Heppenstall at 1:25 PM