J is for Just Out - Seat of Mars 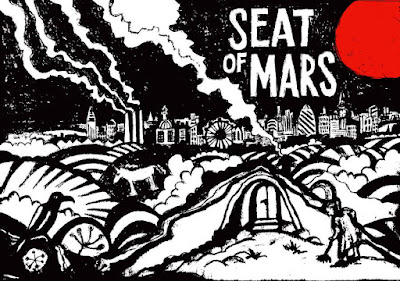 And so, just in time for Christmas, my new book Seat of Mars has been released by Club Orlov Press. Some people will be familiar with the story as I wrote it as a series of blog posts over 2015/2016, but for those who are not, the synopsis is as follows:

"Hell-bent on preserving the privileges of the wealthy in the face of a looming resource crisis, the British government executes a false flag terrorist attack and shuts down the national electricity grid. In the ensuing turmoil a shadowy cabal of globalists watches on with interest from a bunker deep beneath the frozen wastes of Iceland as they ready themselves to roll out the “experiment” across the world. Seat of Mars follows the fortunes of a handful of ordinary people flung into extraordinary times. These include Rose, a teenage Goth, who finds herself pulled into a web of intrigue within a fortified London; Jack and Cat, an ordinary city couple who end up stranded far from home; and the resourceful prepper Art Gwavas who sees the mayhem as a chance to take back what is rightfully his. The story asks the wider question of how well any of us would fare if the safety blanket of industrial civilisation were suddenly pulled from us and whether, from the embers of chaos, something more beautiful could emerge."

This book is an updated, edited and slightly re-jigged version of that story. It's kind of funny how it came about. A couple of years back I wrote a story that featured in John Michael Greer's book After Oil 3 - The Years of Rebirth. That story was set in Greenland in the 25th century and featured a young female archaeologist named Saga—and the story is called Saga and the Bog People. She ventures across the sea to what used to be the Isle of Skye and there she uncovers the corpses of a family buried in a bog inside their Audi. They seemed have died a violent death and the driver was still holding his iPhone in his hand half a millennium on.

This got me wondering who this family might be and it gave me the idea to write a story set 500 years in her past—i.e. our present. I wanted to write some sort of realistic(ish) collapse story that didn't involve zombies. And then a thought occurred to me: do you ever have those conversations where someone says "Oh yeah, the government knows all about peak oil and everything, but they just don't want to admit it? Well, I reasoned, if they know about it, why is it the only thing they try to do is grow the economy as an answer to everything? Why don't they take some kind of proactive action ... such as kill off 2/3 of the population and preserve the lion's share of the remaining land and wealth for an elite few?

So, with this thought in mind, I wondered how they might be able to achieve this. A false flag eco-terrorist event was what I decided upon, giving them the excuse to shut down the electricity transmission grid and essentially fling most of the population back into the middle ages. And if they did this, how would people survive (if at all)? I settled on the idea of taking a few people from different places on the socioeconomic spectrum and tossing them into the maelstrom. Thus we have Art Gwavas, an anarchist prepper who takes over a farm and raids local stores and houses to ensure the survival of his band of followers. Then we have Rose O'Keefe, a young Goth girl astrophysics blogger who gets sucked into a web of intrigue in a fortified London and ends up with some very special powers. There's also a city couple who get caught up in the chaos, the neurotic Prime Minister with a penchant for pills and the—frankly pure evil—political advisor Ignatius Pope, who just does what the voice in his head tells him to.

It's quite a fast-paced story, with the action being spread between modern day London, Cornwall and Iceland. We also venture forth into post-apocalyptic Britain as we follow the travails of Rose O'Keefe as she turns from a young internet sensation into an old woman living in a hobbit hole where she spends a desperate night penning her life story in the knowledge that dawn will bring with it something wicked. It's probably not a book for younger readers or for people who are easily shocked, as I've been told variously that certain story elements are 'sick' (not in a cool way) and 'disturbing'. That isn't to say it contains gratuitous violence—far from it—but neither does it shy away from some some of the darker aspects of humanity.

If you want to get hold of a copy you can click on the book cover image to the right, or search it up on your regional Amazon site - or book distributor. It is only available in hard copy format at present, although it's possible that an eBook might come out in a year or so (issues with piracy remain).

Anyway, if you do read it I hope you enjoy it. Those who read this site and others like it will be familiar with many of the issues covered in the narrative of Seat of Mars. If it proves to be a success I'll write the second instalment in 2017.
Posted by Jason Heppenstall at 12:36 PM