R is for Revolting Beasts 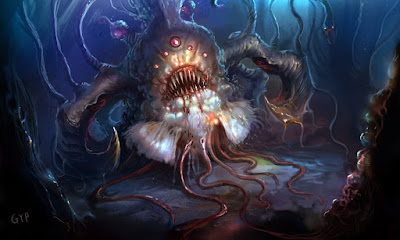 There's something afoot in Britain at the moment, and it's not entirely pleasant. Foul beasts are rising to the surface of the murky pond of the national psyche and sending out suckered tentacles to drag the unwary screaming from their beds. This disquieting scene could mark a step change in the narrative of who we think we are, and set an endpoint to the fairy story we have been telling ourselves for the last few decades. The dark mould stain of entropy is beginning to appear on the walls and no amount of fresh paint seems to get rid of it.

I've taken on a job as a bartender. What better way to earn a little cash at the end of the industrial age?  The place is a hotel: a kind of garden haven beside the sea where people come to spend a few days and get a break from their stressful lives. I pour gin, polish wine glasses and listen to what the customers have to say, offering sympathy where appropriate. Many of them are Germans, on holiday with their families, but there are also many Brits and Americans, and many of these love to talk.

There's a sense of something having gone badly wrong. One national tragedy is eclipsed by the next, seemingly in ever more rapid succession. My daughter came home from school and declared that she and her classmates were getting tired of all the one and two-minutes silences. If it isn't people being run down in the street or having their throats slit as they eat dinner, it's tower-block infernos and other man-made tragedies. Being down at the dog end of Cornwall, of course, our local tragedies tend to be small-scale. A man falling off a cliff here, a surfer drowning there, a dog chasing a rabbit into a disused mineshaft — all tragedies in their own way but also, perversely, all part of the natural order of things. But now the great summer invasion is upon us, as the local population is boosted tenfold by those from up country — and they bring their energies and bigger tragedies with them.

Road rage on the melting tarmac of yet another day of record breaking heat. Me on my bicycle, and the woman in her Audi screaming abuse and yelling about road tax. She's like a heavily made-up monkey, trapped in her metal cage on wheels and enraged at ... something. I almost feel sorry for her. And there are lines of traffic to the horizon on country roads that are so windy and narrow as to be more of a natural feature of the landscape rather than a carriageway filled to the brim with delivery trucks, holidaymakers' cars and white vans. On either side of the stream of vehicles the wildflowers sag in the heat and nod their heads in the light breeze. How can you have road rage when you are surrounded by a blaze of wildflowers?

And the car radios burble out a constant stream of politics. Meaningless, valueless, maddening, hypnotic, soul-deadening politics of who said what to whom and how a commission should be set up to investigate something and how so-and-so expressed outrage about a target not being met in some branch of a bureaucracy somewhere. And Brexit. Brexit, Brexit, Brexit — as if they repeat the silly word enough times they'll beat us into submission and we'll declare the whole thing a mistake and take it all back just so long as they stop talking about it. Perhaps this is adding to the road rage.

And, the people take the bait and battle it out on social media and in pubs and on the streets as if they were rehearsing for some kind of civil war where nobody knows who or what they are fighting for. Many have grown battle weary and simply keep their gobs shut, but there are those who still hold out, tapping away into the early hours of the morning engaged in the hand-to-hand of flame wars, and reporting on their battles to their own echo chambers. An insanity seems has gripped the nation and still the Americans in the bar talk about how civil we all appear and how civil our conduct is compared to 'back home'. And it probably is.

But there was nothing too civil about the declared 'day of rage' yesterday, called in the wake of the Grenfell Tower inferno in London, which killed God-knows how many and ignited a firestorm far larger than the one caused merely by cheapskate polystyrene cladding. Scores dead, killed in their own homes, while the multimillionaire company owner who thought it would be a good idea to beautify a 27-storey tower block filled with mostly immigrant poor people by cladding it with firelighters walks free.

The day of rage turned out to be a damp squib. People were too busy dealing with the kind of heat they'd expect to encounter in Greece to be bothered about getting publicly angry. Even the police were pleading with people to calm down, saying that they'd "had enough" due to the heat and could they please protest when it had cooled down a bit? Being British, whatever that even means anymore, people politely obliged. For now.

But all of a sudden the ship of state seems rudderless. There's a lame duck sitting in Number 10, and people scent blood in the water. Socialism is surging in popularity, after a long leave of absence, as the reality of the precariousness of things starts to become apparent. The body politic is foaming at the mouth and having convulsions right now, and there doesn't appear to be a doctor on hand.

How do we even begin to address these not-inconsiderable problems and tragedies? Well, a vacuous pop song has been released by a multimillionaire TV personality in response to the incineration of the families in the tower block. This comes hot on the heels of the pop concert in Manchester to 'honour' the children and teenagers blown to pieces by an Islamic fundamentalist, even before some of them had been buried. This is our national response to mass death now: gyrations and brave faces and emoting on social media. Celebrities run to be seen at the scene of the latest tragedies, and it's probably not too far fetched to assume that the next logical step is to have them singing and pouting live from the scene of the next terror attack — perhaps rushing them out there in the back of ambulances and police cars, along with the doctors and paramedics. It all smells a bit ... desperate.

People just wish all this nastiness would go away. They hope for it to crawl back into the swamp it came from, and are in no mood for examining the reasons as to why any of it might have appeared in the first place. There's no problem so great that it can't be solved by a hashtag and a declaration of 'One Love', whatever that means. Any deeper examination of cause and effect is shot down in fiery rhetoric. Maybe the great paradigm of our times has nothing to do with scientific enquiry or the Enlightenment — maybe it's to do with the refusal to examine the consequences of previous actions, be they governmental, societal or individual. Indeed, consequences, like elephants in living rooms, are not a popular topic of conversation right now. Which is a shame, but so it goes.

In other news, the Midsummer deadline for entries for my fiction writing challenge has now passed. Thank you to everyone who sent me stories, I will be announcing the results next week.
Posted by Jason Heppenstall at 12:44 PM