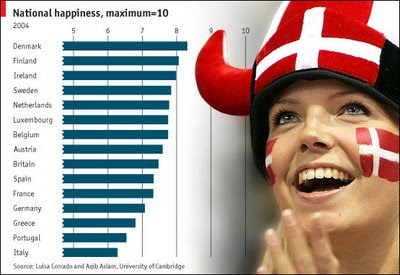 Okay, so it's something that has been bothering me for some time. In response to my last post some readers, on various sites, have said things along the lines of 'Denmark is a great place to be because everyone pulls together and is environmentally-minded, and it would be a big mistake to leave and go back to decrepit Britain.'

Well, bull and red flag. That got my brain boiling and I have three things to say on the subject of Denmark before I never mention the subject again. EVER!

If you're only interested in what's mentioned in the title of this post, skip straight to point three and ignore the rest.

Some explanation is needed.

One. Denmark does not 'pull together'. The people of Denmark do as they are told to do, think what they are told to think, and never question authority. Minds are controlled by state propaganda, and the janteloven, which I mentioned in the previous post, keeps people servile and compliant. One cannot expect any help if something bad happens to you, as I was reminded a couple of months ago when an American student was attacked on a bus here in broad daylight and beaten up for being a 'Chinese boy' while every single passenger turned a blind eye.

This is not an uncommon occurrence. I myself had a bike accident once and lay bleeding on the road for several hours, unconscious. When I came to, people were sat at the nearby bus stop listening to their iPods as if I didn't exist. Nobody offered to help me, even though I had a huge gash on my head and was liberally covered in blood. Thanks for the help guys.

A close-knit community. Did I mention that after five years of living in this block of flats I've only spoken to one neighbour out of eight? I mean, I've said 'Hello' and got either a grunt in return, or more likely, some passive-aggressive silence. I'm not counting the old woman next door, who rang the doorbell to call me something horrible based on my non-Danishness. Or the person who reported me for 'introducing a bio hazard' with my worm compost bin, leading to me having to get rid of it and euthanize my beloved team of red-wrigglers.

Two. Denmark is not the best country in the world, as if there could ever be such a thing. Almost every week there is a report saying so in the media. Danes believe their flag is descended from Heaven and that they are the chosen ones. The country supposedly has the best restaurant and food, the happiest people, the smartest society, the most environmentally friendly civilization on the face of the planet, the best city in the world to live in. I could go on.

They have been talking about this for a long time, as the narrator of this video clearly states:

The reality is that a majority of people in the world have never heard of this pipsqueak country. Please, Danes, stop it. You are embarrassing yourselves and will only regret it later!

(Is it impolite to mention also that it's also the cancer capital of the world, has a huge problem with alcoholism and suicide, is Europe's second most wasteful nation and is addicted to coal and has the fourth largest environmental footprint of any country in the world?) Is it a case of 'we think OSDS'?

Three. Relating to two. This week - and I just have to share this with someone because nobody really in the international press outside of specialist international policy websites has reported it - Denmark flunked out of pretending to be green! Yes, you read it here first. Extra, extra! Greenland, which ahem, is kind of independent and allowed to do what it wants as long as Copenhagen agrees to it, is being sold to the Chinese! Well, not all of it, just the bits that contain uranium. This, apparently, would make supposedly anti-nuclear Denmark one of the biggest exporters of uranium on the planet.

But it's not just uranium. Eco-friendly Denmark wants a slice of the oil pie too. Denmark's version of the-historical-German-party-whose-name-cannot-be-mentioned-in-polite-company- said that 'Future generations will not forgive us,' if Denmark does not go for the massive oil and uranium grab on turf that it controls. And the main parties all seemed to agree.

Greenland's deputy prime minister, the eminent statesman Jens Frederiksen, gave the matter some deep thought and after a profound philosophical enquiry stated: "If everybody else can sell uranium, then we might as well. There's a lot of money in it."

Denmark's avowed social-liberal prime minister Helle Thorning-Schmidt, who is known more for her Gucci handbags than her policies, has become tight-lipped and is refusing to answer any parliamentary questions that contain the word 'Greenland'. Apparently she says it is 'not appropriate' to talk about Greenland's 'private affairs'.

So there you have it. When Denmark put out all those press releases about it being the greenest, most sustainable country on God's fair earth - it didn't really mean it. Apparently it's okay to tell big fat pork pies if that's what everyone else is doing. Especially if it keeps the money taps open and the investment cash rolling in. You can't expect having one of the highest standards of living in the world to just pay for itself, you know.

Now where was that writer from who wrote the story 'The emperor's new clothes'?

This particular blogger is tired of stating the bleeding obvious and will welcome spending his time doing something more positive than thinking about these matters from now on. 'Nuff said.

By the way, a big thanks to everyone who is continuing to read this discursive, peculiar, iconoclastic, mildly subversive blog of mine. This month, for the first time, I've hit the 10,000 page view mark - and it's going up by 10% a month - which is leading me to think that I might actually put some more effort into writing these posts.

As it is, I hammer them out whenever I have a spare moment at the kitchen table. Over the next couple of months I'll be 'in transit' back to England, so will be posting a bit infrequently, but when I get settled I'm planning to start writing in a more structured way.

That's what you can do when a full-time job isn't getting in the way.

Posted by Jason Heppenstall at 10:34 PM