The Wheels of Destiny

When you think about it, it's astonishing that you're alive. That I'm alive; that any of us is alive. The fact that only one of six million or so sperms just happened to reach the egg, which was formed in your grandmother's belly, making you you is astonishing enough, but when you take all the other factors into consideration too it simply becomes mind-blowing that you personally are alive.

I mean, according to Neil Shubin, in his book The Universe Within, the very molecules in our bodies contain traces of the Big Bang and are encoded with the shadow of the creation of the cosmos. Various astronomical events that took place billions of years ago led to the creation of humankind: it's a fact.

Indeed the molecules that compose our bodies, according to Shubin "arose in stellar events in the distant origins of the solar system." Written inside humans, Shubin argues, "is the birth of the stars, the movement of heavenly bodies across the sky, even the origin of days themselves."

And he means all of us BTW, not just a select few middle class types with the right post codes.

But stellar origins aside, it's not often that you get to find out something about your more recent ancestors a little closer to home. That's exactly what happened to me today when my sister contacted me with some interesting news. As an enthusiastic genealogist, she has uncovered all sorts of amazing things about our family. For example, it seems we're descended from the vikings who established the village of Heptonstall (meaning Rosehip Valley in old Scandinavian) in Yorkshire, and that in the intervening millennium most of us have had hard-scrabble jobs, such as picking up stones from fields. Most of us died in our forties from the sheer exhaustion of having terribly hard jobs, bad nutrition, plenty of alcohol and awful, cold, housing.

But recently my sister, let's call her Joanne because, frankly, that's her name, has been trawling a whole lot of digital archives from local newspapers and what she has sent me is mildly horrific. My great great great great grandfather, one Francis Gretton, was a vet in Burton on Trent, in the English Midlands. Just what exactly was he doing at 7:30pm one evening in early October 1872, loitering by the railway tracks? The only witness said he was a 'little fresh' which I presume is a euphemism du jour for 'totally trashed' and the only thing the engine driver of the London express heard was a thud. At the next stop the stoker got out and had a look, finding my G-G-G-G-grandhather's sliced-off foot lodged behind the wheel. Later, they found the rest of him scattered liberally along the track near the place of impact. 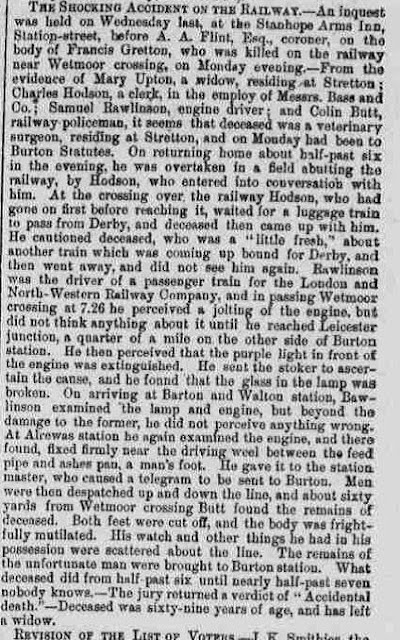 But the question remains; what was he doing on the track for an hour between when he was last seen and when he was hit by the express train? Nobody will ever know.

Another of my relatives, this time a little further back in history, came to a similarly gruesome end beneath the wheels of a cart in Sussex on 15th October 1846. Porter Peskett, slipped as he was getting off his wagon on a road that, through some spooky coincidence of history my sister would live on some 150 years into the future, and was run over by two wheels. The gruesome report can be seen below. 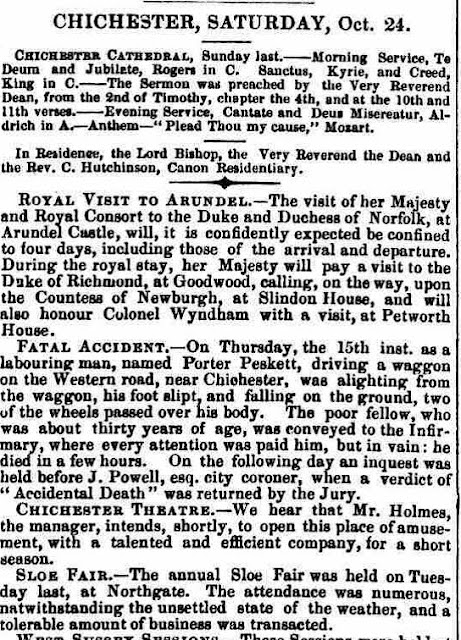 The fact is that had either one of these men failed to reproduce before their fatal date with mankind's greatest invention I would clearly not be here typing these words on a cold Saturday night in Copenhagen two centuries hence.

And finally, here's an obituary of my GGGG grandmother - Nannie Phillips - who got to be 97 on a diet of milk, cheese and bacon - and who didn't fall beneath any wheels. 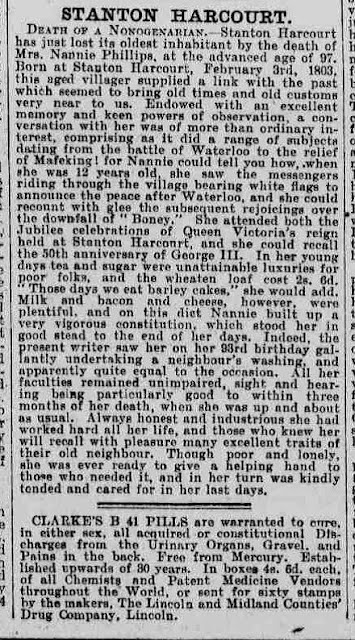 All of this makes one think that it's worth bearing in mind that even if it doesn't feel like it now, the actions that we take today will have an unmeasurable effect in the future. Yes, one day we'll all just be dust and bones, although it's doubtful that any of us will be lucky to have any hard-copy records of our demises stored in databases for our descendents to peruse. Just a thought to bear in mind as we hurtle headlong towards our digital non-future.

None of this is particularly relevant, but I would just like to say that if you are alive and reading this - congratulations.
Posted by Jason Heppenstall at 9:14 PM