Here is the News 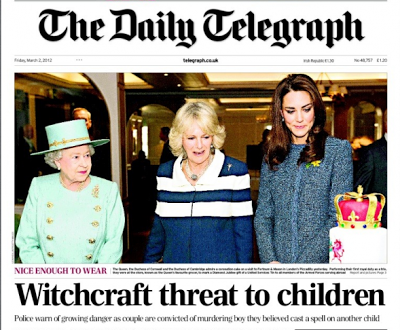 Sometimes I wonder if we are living in a hallucinogenic dream state, or that perhaps this is all some ghastly Truman Show style experiment complete with hidden cameras and false scenery. It certainly feels that way looking at the media. I’m not talking about the ‘bonkers and proud of it’ type of media epitomised by the likes of Fox News, the British tabloids or the Times, but the kind of ‘should know better’ media.

I have to admit it, I’m hopelessly addicted to following the news. Call me a nerd but I just can’t help wanting to know what is going on in the wider world, even if that ‘reality’ is distorted through a million media kaleidoscopes. I realise it’s a bad habit and that my addiction is enabled by having to sit behind a computer for the best part of each day, but there you have it.

But it turns out that it’s getting harder and harder to look into this distorted fractal and actually discern anything important. Take this past week, for example. Every major news outlet in the world has been breathlessly following the case of a man I’ve never heard of who shot his girlfriend, who similarly I’d never heard of.  When I asked a friend who he was she was incredulous and asked me if I was prejudiced against disabled people. “Why should I be?” I asked. “Because he’s got no legs,” was her reply. “And what does he do?” I asked. “He’s a runner.” Oh.

I turned on the BBC world news and was told by the stern anchor that the case had ‘shocked the world’. Really? Of course, it’s sad when someone dies, but we can pick any number of senseless massacres that have happened in recent weeks – have they too ‘shocked the world’? I doubt it.

Perhaps I’m just stating the obvious. In any case, as if to prove my point further, The Guardian (which likes to think of itself as a paragon of the fourth estate) asked us ‘Why are we obsessed with red carpet fashion?’ We are? Nobody told me. To be fair The Guardian does more reporting of so-called serious issues than most other outlets, but these are often relegated to their own little free speech zones in the back pages or down the bottom of webpages.

And then take the Daily Telegraph – a bastion of so-called conservatism and idealistic bombast.  Reading the DT is like passing a car crash on a motorway: you know you shouldn’t look but you just can’t help it. It has long been threatening, like the Times, to go behind a paywall – and I wish it would hurry up and do so. In the meantime I can’t help looking at it because the business analysis seems to be more penetrating than The Guardian’s measly effort – even if it is dripping in nastiness.

But what is really amusing, if you take The Guardian and the Daily Telegraph and compare them, you can get a glimpse of the dynamics of how modern printed or online news media works. Between the two they divide up the market share of middle class educated news consumers. Select prejudices are pandered to, political parties are catered for and divisive ideologies are indulged. Various middle-ground issues are either traded across platforms or shared in a kind of journalism no-mans-land, and given that the readerships of both have a lot more in common than they care to admit, there are plenty of these. But apart from these common shared themes (latest adoring Apple editorial anyone?) the meat and bones of the publication makes sure that readership knows what to expect when they pick up a copy of their preferred organ.

It’s always fun to make lists, and here is one I made of what the Daily Telegraph HATES (and when it hates it really hates …). No article that mentions any of the following can ever be published without lashings of dripping invective, mockery and proxy gunshots across the bows of the ‘liberals’ i.e. Guardian readers.

Of course, when I had made that list, I just had to make some more ...

As you can see, the Daily Telegraph has a longer hate list than the Guardian, which primarily defines itself by what it likes (the Austrian philosopher Rudolf Steiner would probably have defined them as variously Luciferic and Ahrimanic, but that's for a different post). It goes without saying that there is a huge amount of common ground between the two that might include the following: expensive holidays, gourmet restaurants, fashion, sport, how to make lots of money without doing anything, cars, designer goods, property investment etc. Let’s not forget, after all, that the two cater for the middle classes, who tend to have high disposable incomes whatever their prejudices.

Anyway, here’s some little titbits of news you may have missed in the last week buried under all those column miles about the rich man with no legs who allegedly shot a blonde TV ‘reality’ star.

With the ongoing collapse of bee colonies across the world the RSBP is pushing for the ban of neonicotinoid pesticides, which have been linked to bee colony decimation. Without the bees, not to put too fine a point on it, we are even further up shit creek without a paddle than we are at the moment.

Hugh Fearnley Wittingstall is organising a march on Parliament with thousands of others to protest the government’s refusal to protect the seas around Britain. Scientists have singled out 127 areas that urgently need to be turned into marine conservation zones where the wholesale destruction by dredgers is not allowed. The government says only a handful are needed, preferring instead to allow a few fishing companies to trash the sea beds indiscriminately. His campaign is being slammed as ‘unrealistic’ and ‘an insult to hard-working fishermen’. Most marine life forms disagree.

Britain is facing blackouts within a couple of years as old generating plant comes offline before new facilities are built.  Various howls of anguish are starting to rise above the white noise of celebrity gossip, with ‘conservatives’ demanding a free for all of nuclear and fracking, greens demanding a massive rollout of wind turbines and solar panels, and liberals not really giving a damn as long as their espresso machines still work. All very predictable.

Speaking of dirty energy, thousands of climate campaigners in the US marched to the White House to demand a stoppage to the proposed Keystone pipeline, which would transport dirty tarry oil southwards to oil refineries. Their reasoning was that, given that many serious scientists now predict that we may be facing an existential threat to civilization and perhaps even of all human life within several decades it is time to stop building new oil infrastructure. Was Mr Obama there to receive them? No, he was busy playing golf with oil executives in Florida.

That concludes the news. You may now go back to your dream-like state of consuming celebrity titillation and televised sports to ward off any feelings of tooth-gnashing angst you may have about the future.
Posted by Jason Heppenstall at 10:20 AM

Email ThisBlogThis!Share to TwitterShare to FacebookShare to Pinterest
Labels: media